Patty Getty doesn’t take her wedding rings off for anything.

Well, except to do her makeup. But from the database of lost and found items she keeps as part of her job as a customer service representative at Pittsburgh International Airport, other people — and men in particular — aren’t nearly as careful.

Jewelry of all kinds is the No. 1 item turned into Lost and Found. Counting back one year from March 31, Customer Service staff catalogued 863 rings, necklaces and bracelets, and 463 other baubles. 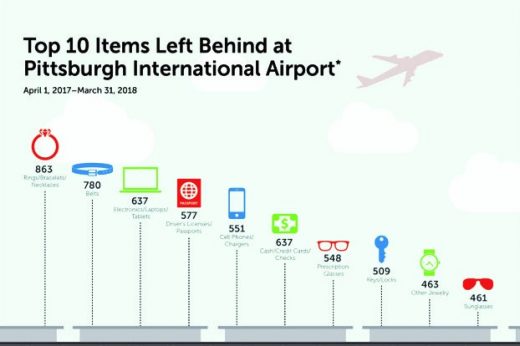 On average, about a thousand items get turned in every month and cataloged in Repo App, the online software tool Getty and the staff use to catalog and keep track of such items.

Wedding rings make up a small portion of that total — about two a month — but you would think the return rate on these precious items would be better.

“We only get about 50 percent of people calling or coming back to reclaim lost (wedding) rings,” said Elise Farris, customer relations manager at PIT. “My guess is that people forget where they left them or lost them and don’t think to contact [the airport].”

Repo App shows that 95 percent of all wedding rings brought to the lost and found are men’s-style rings.

Farris, newly engaged herself, wouldn’t speculate on why the gender divide exists, only to say that “I sometimes get paranoid in thinking I’ll lose my ring and I only just got it.”

“Most rings are brought to us by the cleaning staff or by TSA,” said Getty. “They must either take them off to wash their hands, or (incorrectly) think they have to remove them to get through security.”

Not so, said John Keddie, Community Liason for the Transportation Security Administration at PIT. “Passengers do not have to remove jewelry,” he said. “Our officers can advise passengers as to what might be making them alarm the detector, but it’s up to them whether or not they remove their rings, watches, necklaces, etc.”

Belts come in a close second, no doubt left behind at security check-ins, along with tablets and laptops, cellphones and chargers, and driver’s licenses and passports. Among the stranger items collected?

“One time we had a pair of false teeth turned in,” recalls Jeff Martinelli, Manager of Customer Programs. “Not sure where they were found, but sure enough a few days later we got a call from a gentleman looking for his lost teeth and he came back in, reclaimed them.”

When asked if he requested the gentlemen to prove they were his, Martinelli laughed and said, “He washed them off in the bathroom and popped them back in. It looked like a legitimate fit.”

Items that aren’t claimed within 30 days — aside from lost teeth — are set for a public auction conducted annually, normally in the month of October, by the Allegheny County Airport Authority. Cars are normally the most expensive items, but there’s a wide range of inventory to choose from.

Proceeds from the auction — about $28,000 from lost and found items in 2017 — go to the ACAA’s Charitable Foundation. The Charitable Foundation is a nonprofit 501(c)3 organization, established in 2013 with a mission of enhancing the experience of travelers at Pittsburgh International and Allegheny County Airports with the following focus areas:

Before the 30 days is up, you can always send an email to info@FlyPittsburgh.com to inquire about a lost item.

Men who have misplaced their wedding rings, we’re talking to you.

For another take on PIT’s Lost and Found, visit this Post-Gazette article.