Sunlight streams through the arched windows of the Airside Terminal, casting a golden flare between the internationally renowned Alexander Calder mobile Pittsburgh and the airport’s newest works of art: Interior Decipher and Aerial Allegory, by longtime Pittsburgh artist Thaddeus Mosley.

The completion of the Calder mobile and the new sculptures are separated by more than a half century, but are connected by artists who have both been featured  in one of the largest and longest-running exhibitions of contemporary art in the world — the Carnegie International, open through March 25, 2019, at the Carnegie Museum of Art.

Mosley, 92, was a young man just getting started hand-chiseling intricate sculptures from wood in 1958 when Pittsburgh was first exhibited in the Carnegie International, and later gifted to the airport. Pittsburgh’s free-floating painted aluminum and iron panels took first prize in sculpture at the exhibition that year, which occurs every four to five years.

Rachel Saul Rearick, PIT’s arts & culture manager, said the significance of placing Mosley’s sculptures near the Calder, where they are front and center for thousands of daily travelers, is fitting. The Calder represents the proud history of the exhibition, which traces its beginning to 1896, and Mosley represents the show’s progression. 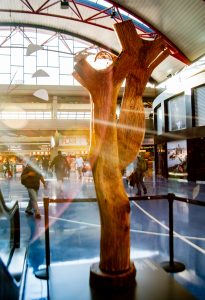 “I think you’d be hard-pressed to find someone who doesn’t recognize the name Alexander Calder, or the significance of his work,” Rearick said. On display in the airport terminal for decades, Pittsburgh has been loaned to major exhibitions in Spain and Italy.

“Within the Pittsburgh art community, you’d be equally hard-pressed to find someone who doesn’t know the name and work of Thad Mosley,” she added.

The large wooden sculptures that rise into gravity-defying shapes feature Mosley’s signature chisel and gouge marks. In a recent report for Pittsburgh’s NPR affiliate station WESA, other artists and exhibit curators called Mosley’s work “singular,” “complex” and “poetic.” He has more than a dozen sculptures that will be featured at the exhibition.

Mosley had a day job for many years as a postal worker, still making time for his craft. Today he’s recognized as a master, and his sculptures have been exhibited locally and nationally at the Carnegie Museum of Art, the Westmoreland Museum of American Art, the David L. Lawrence Convention Center and other places — “too many to dredge up from my feeble memory,” he recently joked.

But these are the first to be shown in an airport.

“Placing Thad’s work next to the Calder mobile says to our city, we recognize his greatness,” Rearick said.

Mosley himself seems amused by the idea.

“No one has ever asked me to do anything like this. I’m eager to see how the work looks in a different space,” he said. 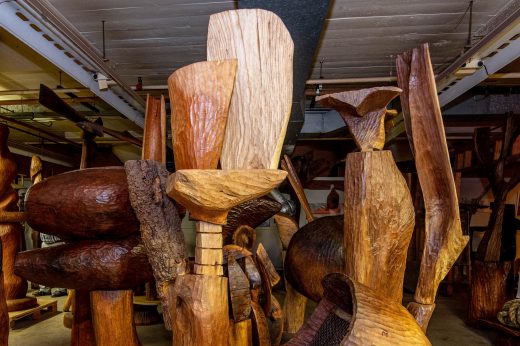 Sculpting has been a lifelong labor of love for Mosley. He says the smaller, eight-foot or less sculptures take about two months to carve, but other larger sculptures can take four or five months. He gets the wood, primarily cherry and walnut, from lumber mills near Uniontown and Greensburg.

Mosley has also taught students his unique craft in Pittsburgh, Memphis and Toronto.

A lover of jazz music, Mosley has vision boards in his studio featuring posters of Miles Davis and Sarah Vaughn. His rich voice can also be heard this week on the airport’s people mover trains promoting the Carnegie International.

“The Carnegie International has existed for decades, putting a global spotlight on the City of Pittsburgh with a focus on industry and culture,” Rearick said. “Having Thad’s artwork at the airport not only welcomes passengers to join in on the current immersive cultural experience happening within our city, it also highlights one of our own hardworking and talented local artists.”

Which is precisely the goal of the airport’s longstanding Art in the Airport program. Last week, when Mosley helped install his sculptures, which are on loan to the airport through the duration of the CI exhibition, travelers instantly noticed them and began snapping photos.

“Look at this beautiful sight at PITairport,” said one traveler on Twitter.

“Thank you for including this art for the public,” said another via Facebook.