The cost of doing business for airlines at Pittsburgh International Airport will fall in 2020 to the lowest level in nearly two decades.

As part of next year’s $114.4 million operating budget that the Allegheny County Airport Authority board of directors approved Nov. 15, PIT’s cost per enplaned passenger – or CPE – will dip to a projected $9.29. That’s the lowest level since 2002, when the CPE was under $8.

An airport’s CPE is the industry standard benchmark for comparing different airports’ costs to airlines. It is not a ticket fee charged to passengers, but rather the total of all airport costs to airlines divided by the carriers’ number of departing passengers.

Airport Authority CEO Christina Cassotis said the lower rate doesn’t mean it will have an impact on attracting new flights.

“As long as the costs are stable and predictable, it becomes a non-factor. If the costs become non-stable, unpredictable and vary wildly, then airlines start to get concerned about what’s going on,” Cassotis said.

“My argument has always been that as long as we can provide stable and predictable costs, that doesn’t become a factor in the [airline] decision making. There are airports in this country with CPEs two, three times as high as ours and it doesn’t keep airlines out. Costs are relative.” 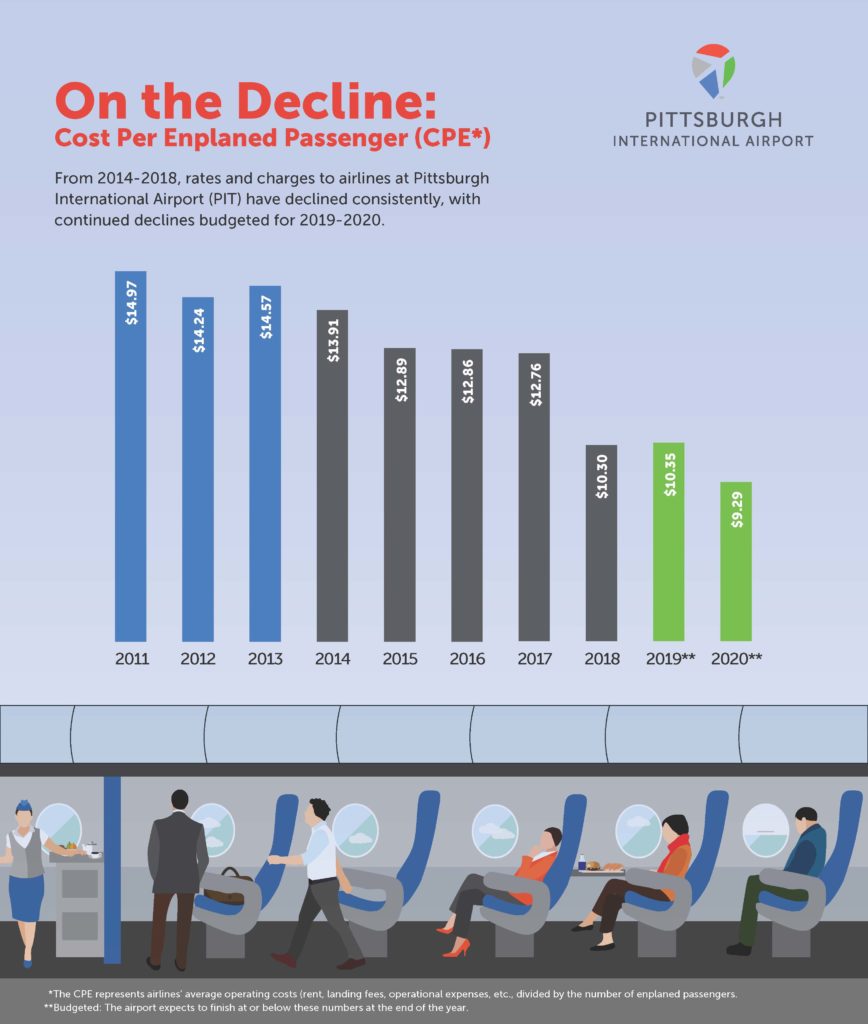 What’s important, she said, is to show that costs are stable and declining long term as a result of management decisions and practices. She attributed the dropping CPE to lower debt, more passengers and carriers, and increased revenue.

Since PIT’s CPE peaked in 2011 at $14.97, it has dropped 38 percent. And that drop is noteworthy, said Bill Swelbar, research engineer with MIT’s International Center for Air Transportation.

“Continuing to drive down the cost per enplanement is a testament of two likely actions,” he said. “Number one, management is being vigilant on cost control. Number two, management is being aggressive finding new traffic to utilize the airport. One is the numerator and one is the denominator.”

Swelbar said airport costs make up only four to five percent of an airline’s cost structure. Rarely is CPE a decision point for an airline to enter a market, he said, but the metric can be a differentiator between markets when an airline is choosing a new point on its network.

PIT is in the midst of a billion-dollar Terminal Modernization Program that will help stabilize costs into the future for the facility, which is 27 years old. Cassotis said she expects the airport’s CPE to be in the $10 range (in 2019 dollars) when the new facility opens in 2023.