We always say it, but around Thanksgiving, we really mean it:

Don’t get to the airport late.

Always the busiest air travel holiday, this year’s Thanksgiving weekend is expected to be the second-busiest since 2000, with 3.7 percent more air travelers anticipated nationally than last year, according to Airlines for America, an industry trade group.

So it’s never really too early to get to the airport, aviation experts say.

Some 31.6 million Americans are expected to fly on U.S. airlines over the 12-day Thanksgiving travel period, up from 30.6 million the year before and about 29 million in 2017, according to AFA.

“People should allow plenty of extra time. We are ready to give people a positive experience,” said Bryan Dietz, vice president of air service development for the Allegheny County Airport Authority.

The holiday, at least in the days leading up to Thanksgiving, is a mix of business travelers and those who travel for the holiday, he said.

“Lots of people come into to Pittsburgh to visit family,” he said.

With tickets as cheap as ever, more people are choosing air travel for the holidays, officials said.

“As airfares remain historically low, we are grateful for the opportunity to unite more families, colleagues and loved ones again this year,” said Katherine Estep, an AFA spokeswoman.

At Pittsburgh International Airport, authorities expect to handle more than 35,000 passengers a day, on average, between Nov. 21 and Dec. 5. 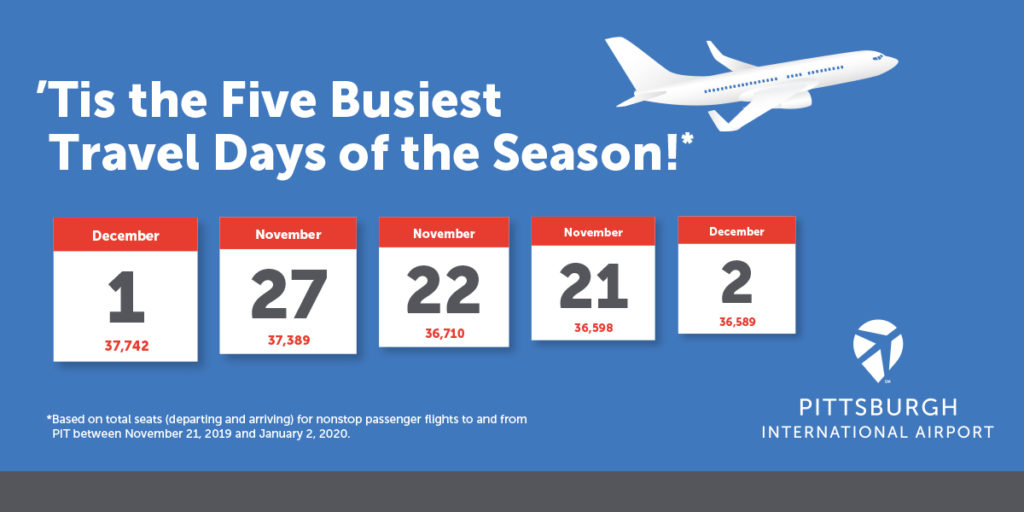 The two quietest travel days in that period are Thanksgiving Day and Black Friday, according to the Allegheny County Airport Authority, which operates PIT. Another day that’s less busy – and one with cheaper flights – is Nov. 25, the Monday before Thanksgiving.

Nationally, daily passenger volumes range from a low of 1.79 million on Thanksgiving Day to 3.1 million on Sunday, Dec. 1, according to AFA.

One step that can make travel easier is downloading an airline app, said Estep. Apps help with everything from getting a boarding pass to flight status updates and tracking checked baggage, she said.

“We encourage travelers to download their carrier’s app. It can save time,” she said.

Get documents in order

Be sure to have proper and current identification, says the TSA, which also suggests that people sign up with PreCheck, which can streamline security screening significantly, though it is not always a guarantee.

TSA PreCheck is a U.S. government program that allows travelers deemed low-risk by the agency to pass through expedited security screening at certain U.S. airports, including Pittsburgh International.

While Thanksgiving is always busy, next year’s holiday could be more complicated because Real ID will be mandatory.

And airports aren’t the only challenge.

Most holiday travelers will drive to their destinations, and the days before and after Thanksgiving will feature jammed highways from coast to coast.

Wednesday afternoon will be the worst travel period nationally, with trips taking as much as four times longer than normal in cities such as Atlanta, Los Angeles and New York, according to INRIX, a global transportation analytics company.

For most Americans, AAA expects gasoline prices to be similar to last year’s Thanksgiving holiday, which averaged $2.57.