In the aviation industry, there just aren’t enough students like Sam Dubel.

A 33-year-old from Beaver County, Pa. west of Pittsburgh, Dubel will graduate from the Pittsburgh Institute of Aeronautics next month. With the degree, he will earn an FAA Airframe & Powerplant Certification, enabling him to work as an aircraft mechanic.

“We’re the ones that fix the planes and literally get them off the ground,” said Dubel, who found an interest in aviation as a kid, spotting planes with family in his hometown of Houston. “It’s a 24/7 operation, which is pretty crazy.”

Dubel is one of thousands of new aircraft mechanics whose skills will be in high demand over the next two decades. While the national pilot shortage makes headlines, forecasts by Boeing project the need for approximately 193,000 aircraft maintenance technicians (AMTs) to enter the workforce in North America by 2038.

To address the shortage, airlines and other industry organizations, including the Regional Airline Association (RAA), are working to increase awareness of the growing demand for aircraft mechanics and pilots alike, according to Faye Malarkey Black, president and CEO of the RAA.

“It’s something we should all be concerned about, because it’s not the coming crisis – the crisis is here and growing,” said Black, adding that regional and major carriers are engaging in public outreach and offering incentive programs, among other tactics.

Nationwide, there are more positions in aviation maintenance than there are available graduates, said Steven Sabold, Director of Marketing and I.T. for the Pittsburgh Institute of Aeronautics (PIA).

“There’s just not a lot of people getting into the industry,” said Sabold. “There are a lot of reasons for it. One of the big ones has been the mindset that you have to have a four-year degree to be successful. And while that’s great and students can still continue to do that, the trades are now in this huge demand across the board — not just in aviation.”

Interest in the field appears to be increasing, though, said David Koehler, an instructor at PIA. This fall, the school welcomed more than 80 new students. Including all of its campuses, school enrollment is up 22 percent year-over-year, officials said.

“People are starting to wake up to the fact that the trades are lacking in people. They’re starting to come in more and more, definitely,” said Koehler. “All these people get out with a four-year degree from college and can’t get a job, and then they have all those student loans. Our students have job offers before they even graduate. Sometimes there are two to three companies going after the same person.”

Located adjacent to Allegheny County Airport in West Mifflin, Pa., just east of Pittsburgh, PIA offers specialized programs in either Aviation Maintenance or Aviation Electronics, which focuses on the technology of an aircraft’s flight deck, or cockpit. Both are 21-month programs that allow students to earn an associate’s degree in Specialized Technology and also include typical “core” courses like English, Math and History.

For Dubel, knowing that aircraft maintenance technicians are in high demand was certainly a factor in his decision to enroll in the program.

“My brother-in-law went to school here and he had tons of job offers before he left, and that was a big thing for me,” said Dubel. “He told me I’d probably have around seven job offers by the time I graduate. Also, benefits, money and location are kind of the big things you are looking for.”

In 2018, Forbes ranked PIA the No. 1 Two-Year Trade School in the country, based on factors including post-graduate success, affordability, completion rates and student experience.

The business magazine wrote, “[PIA] plays ball in an industry where the jobs not only are high-paying, but are in desperate need. Thirty percent of aircraft maintenance technicians nationwide have reached or are nearing retirement age, and only two percent of the workforce is new.”

In addition to its Pittsburgh campus, PIA has locations in Hagerstown, Md., Myrtle Beach, S,C., and Youngstown, Ohio. The Pittsburgh campus is the only program to offer the full, 21-month program, as the branch campuses instead provide an accelerated 16-month course for which students earn an FAA Aircraft Maintenance Technician certificate. 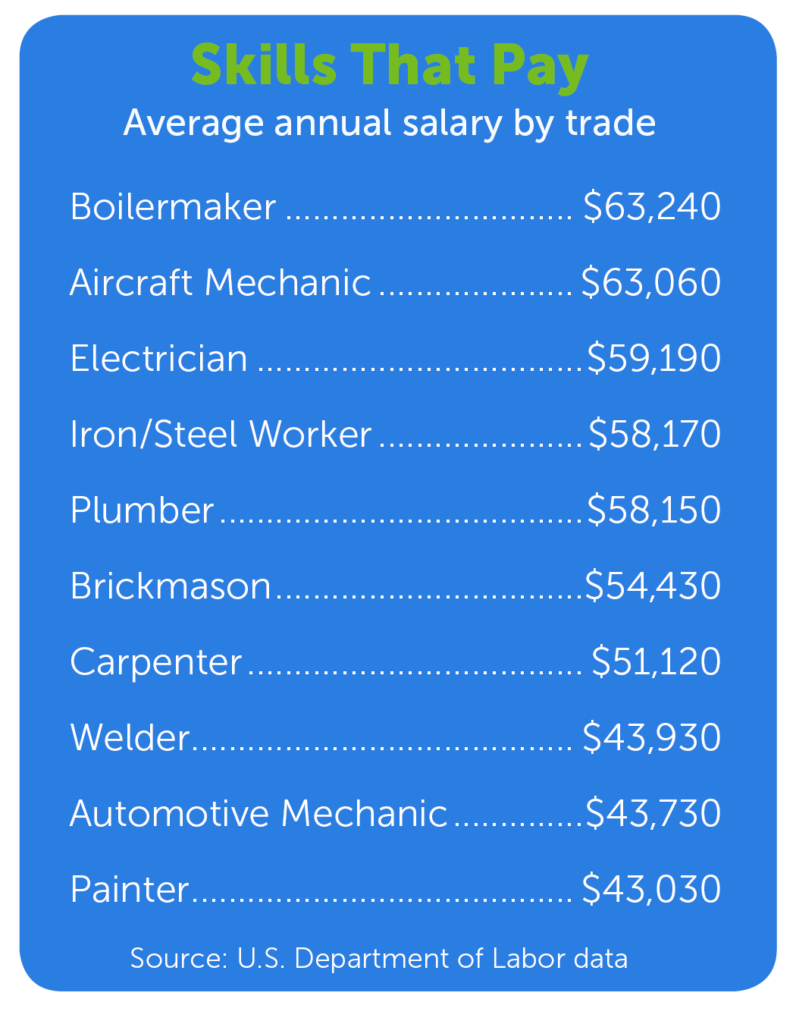 PIA’s Academic Dean Jason Pfarr noted that the technical school sets itself apart from similar programs by offering a more hands-on experience for its students.

“A lot of places don’t do the things that we do,” Pfarr said. “We teach our students towing, they get on the tug and move the aircraft under supervision of the instructor, and we run the engine up to full power and the students get that experience.”

The total cost of tuition is about $41,000 for students attending the Pittsburgh campus, earning their associate’s degree through the 21-month course. Scholarships and financial aid are also available. In 2019, the trade school reported an employment rate of 91 percent for its Pittsburgh location, citing that on average, students are employed within 47 days of graduation.

Top employers hiring PIA graduates include Boeing, Embraer, Pratt & Whitney, and Bombardier Aerospace, to name a few – with the average annual salary for aircraft maintenance technicians being $63,060, as reported by the U.S. Department of Labor.

Along with factors including pay and high employment rates, Koehler, an instructor at PIA for 20 years, added that aircraft maintenance is a versatile field, and the work is meaningful.

“You pretty much have to be a jack of all trades,” said Koehler. “You have to know a little about everything and the maintenance, and there’s a lot of disciplines they have to learn going through the 21 months here. It may not be until they graduate and start working out there, but they do realize that people’s lives are depending on their work. Airplanes have to be looked at every single time before they fly.”