0Imagine the aftermath of a devastating hurricane. Populated areas are flooded. The ground is obscured by high water.

Before ground support or even traditional helicopters are deployed, autonomous aircraft could fly to the affected area—avoiding obstacles like downed trees—and locate a dry, flat place to land and deliver supplies to people in need.

“The day we can do that is the day when we will have succeeded in [our] vision,” said Marcel Bergerman, COO and co-founder of Near Earth Autonomy, in a recent interview with Pittsburgh Technology Council as part of its “Business As Usual” series.

The Pittsburgh-based company, founded in 2012, is developing the technology to power unmanned aircraft of all types, including those that could deploy natural disaster relief.

The company began with a core group of 10 to 12 robotics engineers, and now has a similar-sized group, led by two retired U.S. Army helicopter pilots, that works on flight operations and integrating technologies into different types of aircraft. Other engineers, project managers and administrative support round out the company’s 85-person staff.

Robots in the air

CEO Sanjiv Singh said during the interview that when he came to Carnegie Mellon University in the 1980s, field robotics was just beginning to apply technology to conditions outside controlled ones like warehouses and factories. This led to developing specialized robotics systems for other applications.

“We saw an opportunity in using some of the same technologies for air vehicles,” said Singh, who received his PhD in robotics from CMU in 1995.

In August, Near Earth announced plans for a system to partner with Kaman Aerospace to design a system for its K-MAX helicopter, which is capable of carrying 6,000 pounds of payload.

“An unmanned K-MAX would allow this kind of vehicle to fly in applications where it’s very dangerous for people to go,” Singh said, describing future applications like applying a large volume of water or fire retardant to wildfires.

The company is also considering other point-to-point aircraft, such as electric vertical takeoff and landing aircraft (eVTOL).

“They have the potential for being much cheaper and much more reliable than the helicopters we see today, which require very skilled pilots and a lot of maintenance, just because of the way they’re built,” Singh said.

“So the electric VTOL aircraft of the future promise something we’ve been thinking about for a long time. We’ve been promised this sort of ‘Jetsons’ age where you could fly from point-to-point.”

That could mean larger aircraft that autonomously fly from someone’s garage to a barbecue — or smaller ones that can carry a beer to a beach chair.

Near Earth is first focused on two goals: scouting, or getting information back to someone who can use it; and transport, or moving people or goods from one place to another. 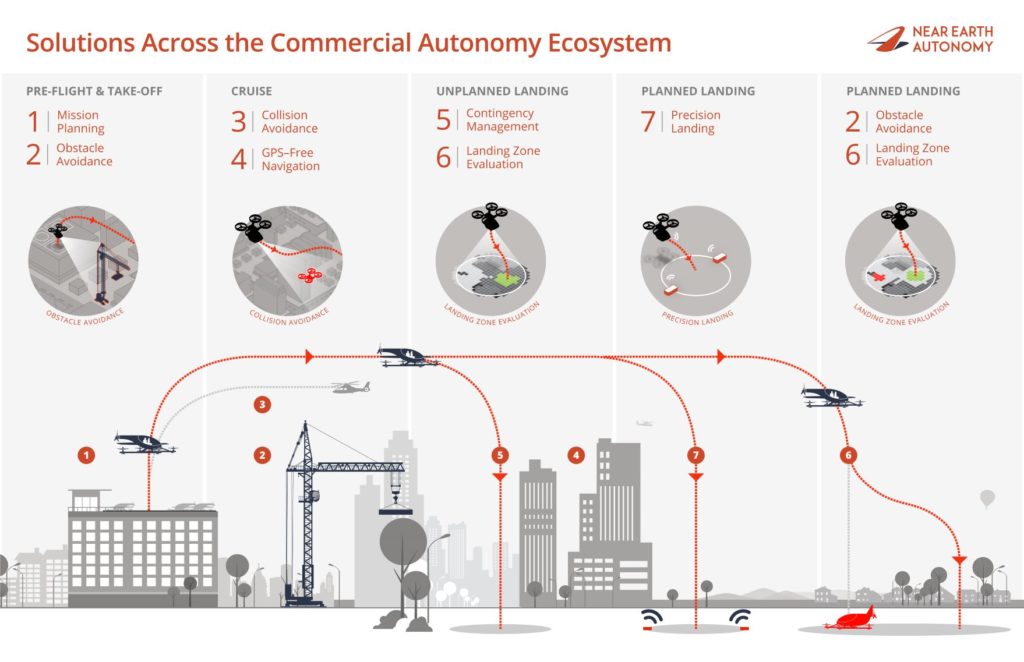 “This gives you the idea of what a future commercial autonomy ecosystem might look like,” Singh said.

Other applications include military logistics in which troops could move in small groups and summon small batches of supplies only when needed, as opposed to slowly moving with all their supplies in a large convoy.

“They go out in small groups, and no matter where they are, they summon the supplies and they come in the middle of the night, flying,” said Bergerman, who has a PhD in electrical and computer engineering from CMU. “They are delivered, and people go to their next mission.”

For these hypothetical situations to become reality, Singh said Near Earth is navigating the hurdles any advanced technology needs to overcome: capability, reliability and affordability.

“All three of those things have to happen for it to become commonplace in the way we think of automobiles today,” he said, adding that for technology like this, or similar ones like autonomous cars, everyone has to agree on a set standard of reliability first.

Aviation in a post-pandemic world could help speed up the development of autonomous systems, Singh said.

Audrey Russo, CEO of the Pittsburgh Tech Council, who led the discussion, acknowledged the forward-thinking nature of Near Earth Autonomy’s work.

“This is just another example of the kinds of incredible people, and leaders, who are building tomorrow right here in Pittsburgh—growing, stable, committed, and relentless in their pursuit.”