As U.S. lawmakers increasingly focus on the upcoming election, a financial aid package for the aviation sector appears unlikely before at least mid-November, leaving a struggling industry to wonder what will happen as travel experiences its traditional slowdown for the winter season.

Still reeling from pandemic-related losses in the tens of billions of dollars, the industry axed more than 40,000 jobs on Oct. 1 as payroll protections from a March federal aid package expired.

Most executive leadership teams have taken salary cuts as well. Companies are restructuring, trying to predict what the post-pandemic landscape will look like with new health and safety protocols, international regulations and other changes affecting the very basics of air travel.

“I want to thank Alex for all that he has done at British Airways,” said Luis Gallego, IAG chief executive, in a statement. “He worked tirelessly to modernize the airline in the years leading up to the celebration of its 100th anniversary.”

Cruz became chairman and chief executive of British Airways in 2016.

British Airways’ move comes as U.S. airlines are expected to announce their third-quarter results this week, with Delta leading the way on Tuesday morning. While there is no doubt the industry took heavy losses, it remains to be seen just how deep the red ink flows.

The industry lost a collective $11 billion in the second quarter, the first full period affected by the pandemic. Some analysts fear the third quarter could be worse.

Analysts are predicting Delta will announce nearly $2 billion in losses. United, which reports Wednesday, is expected to announce it lost at least $2.25 billion. American is expected to report losses approaching $3 billion when it reports on Oct. 22.

Southwest Airlines, which operates on a low-cost carrier business model but is in the same class as the legacy carriers in terms of size, is also expected to announce losses but is considered by some observers to be best-positioned to rebound from the pandemic doldrums.

The airline may have only bolstered those opinions on Monday morning when it announced it would be adding service to Chicago O’Hare International and George Bush (Houston) Intercontinental airports next year.

Southwest has served Midway International and Houston Hobby in those respective markets for decades, but it hasn’t served Bush since 2005 and has never operated flights out of O’Hare.

Service to both airports is expected to begin in the first half of 2021, but no further details regarding destinations or schedules was announced.

“Southwest owes decades of success to our employees and customers who have supported our business in Chicago and Houston,” CEO Gary Kelly said in a statement. “Today’s announcement furthers our commitment to both cities as we add service to share Southwest’s value and hospitality with more leisure and business travelers.” 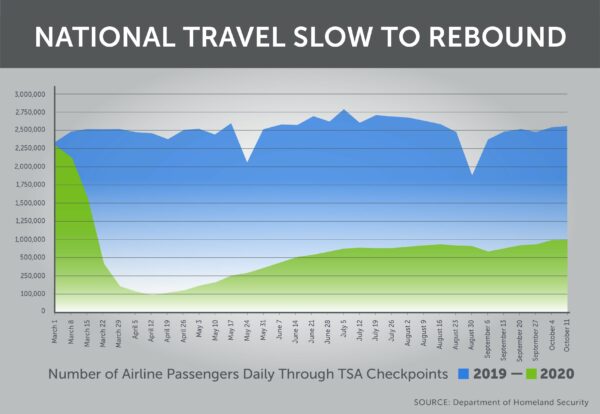 The last potential bright spots for the industry on the 2020 calendar are Thanksgiving and Christmas.

Air travel peaks during holiday periods, with Thanksgiving usually leading the way. For example, last year the Transportation Security Administration processed more than 26 million people between Nov. 22 and Dec. 2, a record for the period.

No one expects those numbers this year, but air travel has continued to slowly climb from its late-March depths. On Sunday, TSA screened 984,234 passengers, the highest one-day total since March 16. In fact, daily totals topped 900,000 on Thursday and Friday as well, making it the most-traveled weekend since the pandemic began.

The aviation industry continues to innovate, especially with those busy holiday travel periods looming, to make air travel as safe and healthy as possible for passengers and staff.

Plans for an “air bridge” between New York City and London are inching closer to reality as airline and government officials try to set up a series of protocols that would eliminate the need for lengthy quarantine periods on either end of that popular intercontinental route.

Currently, U.S. citizens must quarantine for 14 days after arriving in London, and travelers from the U.K. are barred from entering the U.S. unless they are citizens or permanent residents.

The crux of the plan would require passengers to submit to COVID-19 tests at either end of the flight. Negative tests would shorten quarantine periods, perhaps requiring as little as 24 hours in isolation.