People just want to get away.

That’s the conclusion from a Blue Sky analysis of commercial airline passengers who have been traveling during the COVID-19 pandemic.

In possibly the most tumultuous period in the history of aviation, passenger volumes at airports nationwide declined by about 61 percent in 2020, according to Transportation Security Administration data. But the losses were smaller in airports that cater to leisure travelers seeking a little escape, the analysis shows.

But, based on origin and destination passenger traffic (meaning where people begin and end their trips, not the connecting airport), Denver International surpassed LAX to become the busiest airport in the U.S. during the pandemic. Leisure travelers heading for the mountains is one reason, Alicie said, as well as travel restrictions imposed in California because of surging COVID cases. 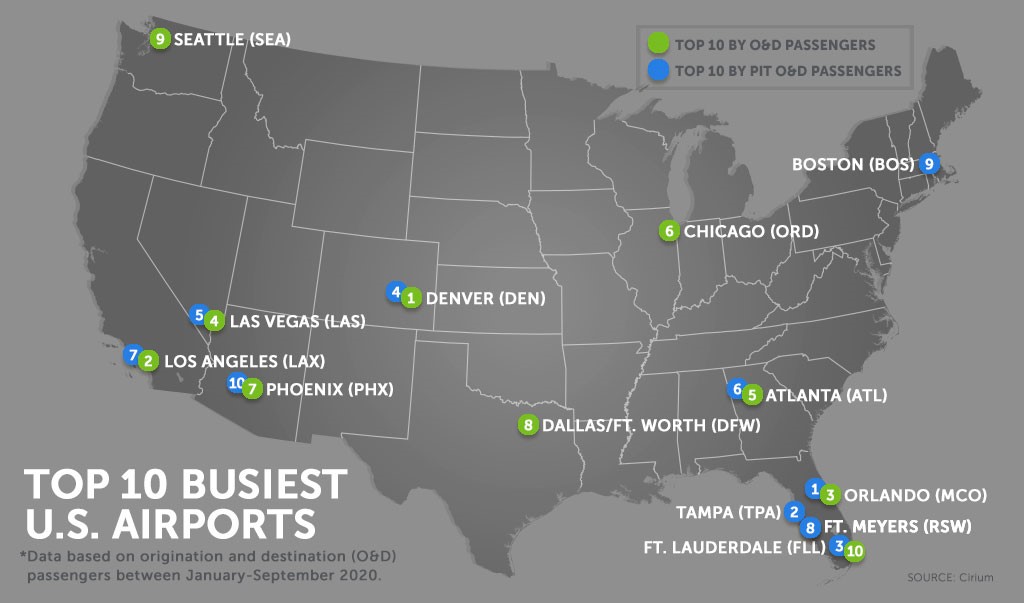 “One of the biggest question marks for the industry right now is, ‘When will business traffic return and how much of it will return?’” Alicie said.

“Even the big airlines like American, Delta and United have repositioned their networks and have added a lot more leisure-based destinations and reduced their business markets. It’s absolutely transformational in terms of route networks,” she added.

The shift in travel demand could bring a competitive advantage for low-cost and ultra-low cost carriers like Allegiant, Spirit and Frontier.

In 2020, about one in five passengers at Pittsburgh International traveled on ultra-low cost carriers. That ratio was one in 10 in 2019. In December, Spirit Airlines passed Delta Air Lines to become the No. 3 ranking market share holder at PIT for the month.

Nationally, airlines like Allegiant and Southwest also have experienced smaller decreases in passenger traffic, compared to other carriers.

Based on data from January through September 2020, Allegiant saw only a 16 percent decrease in passengers, year-over-year. During that same period, Southwest was down 30 percent from the airline’s 2019 numbers.

Legacy airlines American and United, however, saw drops in passenger traffic upward of 65 percent in 2020.

“Passengers are choosing the more leisure-based destinations, which just naturally favors the route networks of low-cost and ultra-low cost carriers,” Alicie said. “But, on top of that, it’s really provided an opportunity for them to grow into new and different places that they may not have grown into otherwise. This also has provided them an opportunity to grow once recovery begins.”

And with the possibility that business travel may not ever fully recover to pre-pandemic levels, legacy carriers may need to continue to shift their strategy to remain competitive with low-cost airlines.

“Most passengers make their decision on which airline they are going to fly on by price and schedule,” Alicie said. “Those are the things that are going to be really important going forward. It’s kind of just going back to the basics.”