As more travelers get vaccinated and the summer travel season approaches, the recovery for the airline industry continues to move ahead at full steam.

According to data from industry group Airlines for America, the average load factor for flights operated by U.S. carriers was 75 percent as of Friday—up nearly 10 percent from early March.

To be sure, air travel has yet to rebound fully from COVID-19. Current passenger volumes are running at 40 percent below average pre-pandemic levels, compared to 53 percent in March. Airlines for America reports domestic flights are down 37 percent. International flights, meanwhile, are down by 57 percent.

But signs of recovery abound. On Sunday, TSA  reported over 1.7 million travelers passing through checkpoints nationwide—the single busiest travel day since the start of the pandemic.

Consumer trends indicate that leisure travel will make up most of the traffic for airlines this summer as corporate travel continues to lag. As a result, airlines have shifted their networks by adding popular sunny destinations from northern cities, including Pittsburgh. 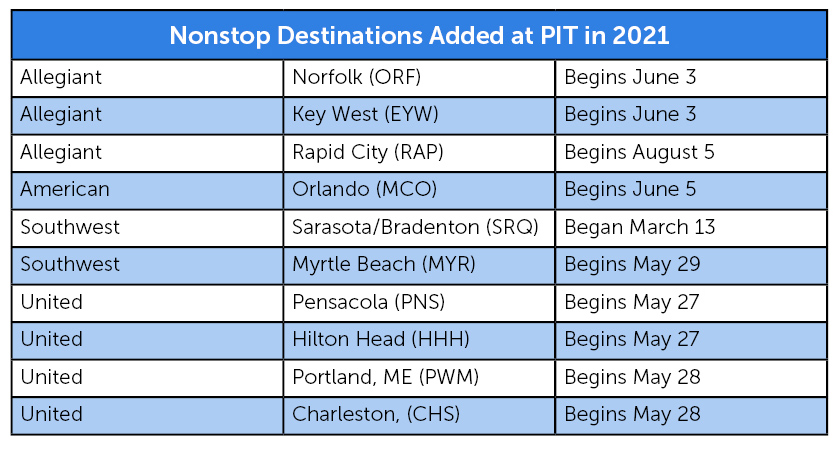 Earlier this month, Southwest announced that it would resume nonstop, weekend-only service between PIT and Cancun, Mexico. The airline will also start nonstop service to Myrtle Beach, S.C., that will operate five times a week through this summer.

In June, legacy carriers American and United will launch multiple leisure flights from PIT. American will begin service to Orlando, Fla., that will operate on Saturdays. United, meanwhile, will launch flights to Charleston and Hilton Head in South Carolina, as well as Pensacola, Fla., and Portland, Maine, on its Bombardier CRJ-550 regional jets.

Allegiant resumed its flights to Myrtle Beach, S.C., this month. In addition, the carrier will commence twice-weekly seasonal service to Norfolk, Va., and Key West, Fla., in June.

Over a year after airlines parked hundreds of planes and laid off thousands of employees, carriers are scrambling to bring back airplanes and staff to operate additional flights added because of increasing demand.

Recently, Southwest announced that it would recall all its remaining flight attendants from temporary leave. The airline also plans to resume hiring of flight attendants in the coming weeks, according to CNBC.

Additionally, American is pulling dozens of aircraft out of storage from its maintenance base at Tulsa, Oklahoma, and the airplane “boneyard” in Roswell, New Mexico. In a report by CNN, American plans to have its entire active fleet of airplanes back in service in time for this summer.

Some airlines, particularly ultra-low-cost carriers, expect to equal or surpass 2019 numbers as they gear towards a strong surge in leisure travel this summer.

This year, Allegiant became the first U.S. airline to match its pre-pandemic capacity and plans to operate more flights this summer than it did in 2019, according to its latest earnings report. Spirit, meanwhile, anticipates to fully restore its total capacity from 2019 by the middle of this year.