After 18 months of staying home and cancelling vacation plans, leisure travel has come roaring back, with airlines launching new routes and flights across the country.

“The pandemic did not quench the thirst for air travel,” said Bill Swelbar, chief industry analyst at Swelbar-Zhong Consultancy. “Leisure demand got stronger throughout the pandemic and by mid-July 2021, bookings for leisure travel were back to 2019 levels.”

On Aug. 1, the Transportation Security Administration recorded 2,238,462 travelers through airport security nationally, the highest number of passengers since Feb. 12, 2020. Aug. 1 was also the busiest day of the summer travel season at Pittsburgh International Airport, with 13,258 travelers moving through the checkpoint.

But the number of travelers doesn’t tell the full story. Nationwide, the airline industry expects to add 862 new domestic routes this year, an increase of 42 percent compared to 2019, according to data from Cirium Innovata Schedules, a database that contains aggregated flight schedules across all airlines.

The new routes include city pairs that were not served in the preceding two years, as well as a new carrier starting service between two airports with existing nonstop flights.

The addition of more leisure routes is an example of how the airline industry has continued to pivot to accommodate the demands of flyers. With international and business travel slow to recover, airlines are redirecting their aircraft to accommodate leisure travelers. Legacy airlines, such as United and American, transitioned from traditional hub flying to offering more point-to-point flying.

“Even the network carriers adopted strategies of overflying hubs during the pandemic,” said Swelbar.

Southwest started new service nationwide to 18 destinations it previously didn’t serve before March 2020, and many of those routes have the leisure traveler in mind. The airline added four routes at PIT: Austin, Texas; Miami and Sarasota/ Bradenton, Florida; and Myrtle Beach, South Carolina.

“However, when travel demand dropped dramatically at the beginning of the pandemic – especially business travel and travel to international markets – we had a unique opportunity to deploy spare aircraft to match customer demand for domestic, leisure travel destinations.” 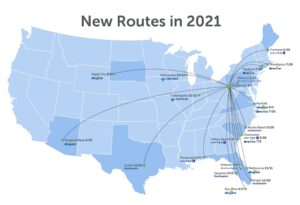 Allegiant Air, American Airlines, United Airlines and Breeze Airways also launched new leisure destinations from PIT in 2021. Most of the routes are seasonal and cater to popular vacation spots, such as Hilton Head Island, Charleston and Myrtle Beach, all in South Carolina; Virginia Beach, Virginia; and Key West, Florida.

“These routes will continue through Labor Day Weekend,” said a United Airlines spokesperson in statement. “As always, we will review demand and adjust our schedule to where it makes the most sense to meet customer demand.”

Rotterdam said, “There was some interesting experimentation that airlines did that led to routes that we may not have talked about in 2019. Pittsburgh to Hilton Head is the perfect example of the unique, leisure-focused, routes airlines added to better serve our travelers in 2021.”

Allegiant Air debuted five new destinations at PIT for 2021. One of those locations was PIT to Rapid City, South Dakota, which was added specifically for the Sturgis Motorcycle Rally in August. Then there’s PIT to Melbourne, Florida, a new year-round service that starts on Nov. 11. Melbourne is the 18th city Allegiant will serve from its growing Pittsburgh network.

With the focus on point-to-point flying, the question remains: what is the likelihood new leisure routes will stay, or will airlines switch back to hub flying?

“As demand returns in a more uniform way across geographies and sectors, not all the flying that has been added during the pandemic will remain,” said Swelbar.