Bill Logue says he got a good deal.

Logue, who lives in nearby Moon Township, Pa., and owns a contracting company, showed up for Pittsburgh International Airport’s annual auction and walked away with a used fire truck.

“Initially, I had no intention of buying the fire truck,” Logue said. “It was kind of spur of the moment, and I thought, ‘Whoa, that’s awful cheap. I can rent that out.”

Logue didn’t come to the auction looking for a fire engine.

“I have a granddaughter who’s 16 and I was interested in one of the cars for her. Something inexpensive for someone learning to drive,” he said.

The fire truck brought the highest price of the thousands of items sold Oct. 23 as the auction returned in person after a one-year hiatus due to the pandemic. Other items included nearly 1,000 pieces of jewelry, more than 500 electronic items, nine abandoned vehicles, and runway brooms and plows.

After the fire truck, other top-selling items included:

Other vehicles went for as little as $1,100. Boxes of jewelry went anywhere from $40 to $1,300, while boxes of iPhones and Apple watches went for a few hundred dollars. A game-worn Steelers jersey sold for $175. An Elf on the Shelf sold as part of a Christmas lot for $80.

“We don’t have another auction where we sell hundreds of iPads and hundreds of cell phones. It’s just a lot of fun stuff,” Pyle said. “The items that we find as we sort things out, there’s always two or three spectacular items.”

Pyle said the crowd at the airport auction brings a lot of onlookers.

“People who come to this auction are not historically auction people—they’ve seen it on the news, they’ve heard about it, their friends are going to it, and so that’s what makes this fun for us,” he said. “I love seeing people get so excited cause they got the iPad or they got alligator heads.”

Proceeds from personal items left behind go to the ACAA Charitable Foundation, which helps support the airport’s military lounge, Art in the Airport program, aviation scholarships and workforce development.

Not everything left behind goes to the auction. The Airport Authority donated dozens of boxes of clothing to Circles of Greater Pittsburgh, a nonprofit that assists individuals living in poverty. Boxes of unclaimed prescription eyeglasses were donated to the Pittsburgh chapter of the Lions Club.

Proceeds from the sale of ACAA equipment, such as the fire truck and runway brooms, go back into the airport’s general fund. The Airport Authority has the right to collect unpaid parking fees from abandoned vehicles that are auctioned off; whatever money is left goes to the state.

Logue didn’t find a car for his granddaughter, but about that fire truck: It’s a 2001 model that was part of the fleet at PIT’s fire department. It served until two years ago, when the department received federal funds to get another fire truck.

Logue said he already made a deal with a company that’s planning to fix it up and rent it to smaller airports in the south.

“I hate to see it go to waste when it could be used for something else,” he said. 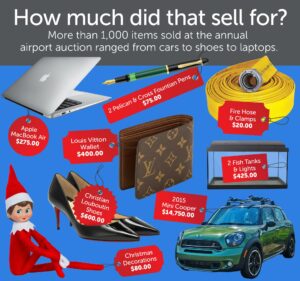