Holiday gifts – in the form of new nonstop flights – have arrived early for passengers at Pittsburgh International Airport.

Air travel this holiday season is projected to be up nearly 80 percent compared to 2020, according to AAA. For Thanksgiving alone, nearly 4.2 million people nationwide are expected to travel.

To help meet rising demand, PIT will have several new and resuming routes available for travelers looking to fly nonstop to their destinations. Starting this month, PIT tacked on a new city to its route map as Allegiant Air began service to Melbourne, Fla., marking the first time the two airports have been connected by nonstop service. Year-round flights to Melbourne operate twice a week on Thursdays and Sundays with one-way fares as low as $39.

“Melbourne, located right in the heart of Florida’s famed Space Coast, provides a variety of attractions and activities that appeal to any traveler’s itinerary. We’re excited to provide Pittsburgh residents with convenient, low-cost flights to get there,” said Drew Wells, Allegiant’s senior vice president of revenue and planning.

Melbourne is the fifth new city added by Allegiant this year at PIT – joining Norfolk, Key West, Phoenix-Mesa, and Rapid City – and is its 19th destination from Pittsburgh. In addition, Melbourne is the 15th Florida market to be served nonstop from PIT.

“Allegiant is a great partner as they continue to add service to new destinations from Pittsburgh,” said Bryan Dietz, senior vice president of Air Service and Commercial Development. “With surging leisure demand, we’re grateful that Allegiant continues to offer travelers in our region more options to fly with these nonstop flights.”

On Saturday, Southwest launched new nonstop flights to Miami and resumed international service to Cancun from PIT. In addition, the carrier will commence nonstop service to Austin, Texas on Nov. 23.

Beyond strong leisure travel, corporate traffic has continued to steadily rise. As a result, additional flights to key business centers have been added from PIT this month. Southwest, American and Delta, which carry a significant number of business travelers, all saw triple-digit year-over-year percent change in passengers in October. 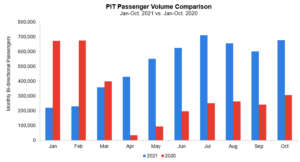