Amid growing competition for the Pittsburgh air service market, Delta Air Lines announced Wednesday that its summer-time nonstop route from Pittsburgh International Airport to Paris will not return in 2019.

The decision comes a month after British Airways announced year-round nonstop service to London Heathrow, citing a growing and diversified Pittsburgh economy as a good match for the U.K.–based carrier.

“It was a good 10-year run with Delta and for many years they were our only nonstop option to Europe,” said Allegheny County Airport Authority CEO Christina Cassotis. “But the reality is the Pittsburgh market is evolving and growing, and European carriers have entered the market offering additional nonstop transatlantic service.” 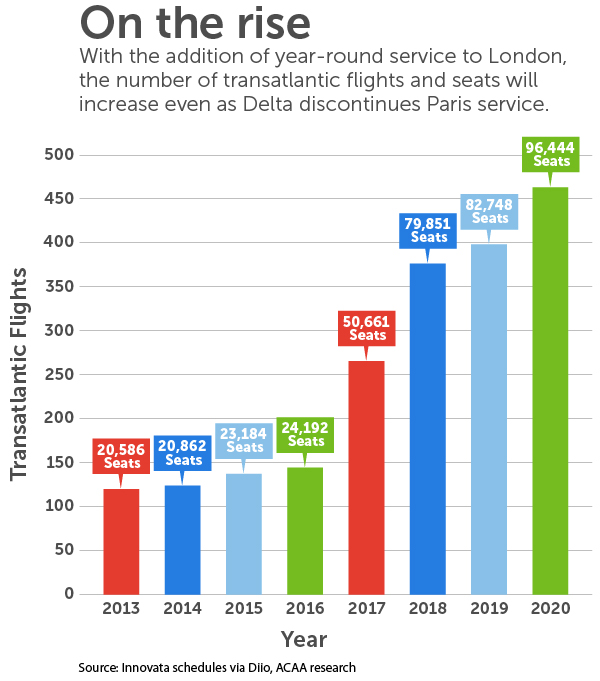 The London service on British Airways, along with year-round flights to Reykjavik on WOW and seasonal service to Frankfurt on Condor, contributes to a six percent increase in transatlantic flights in 2019.  That will grow an additional 16 percent in 2020 as the London flight operates for the full year.

Delta officials announced the move as part of broad shifts across its network.

“Due to increased transatlantic capacity in the Pittsburgh market and other commercial considerations, Delta has made the tough business decision to discontinue Pittsburgh-Paris service after the summer 2018 season,” the carrier announced in a statement Wednesday.

“What makes the British Airways service so important is not only to give your largest international market a nonstop option, but also to give the community access to the scope and scale of the BA services offered beyond London Heathrow.  Bottom line, the Delta service helped demonstrate that PIT can support international service even if it was only a seasonal offering.”

Delta began the Paris service in 2009 with a year-round schedule backed by up to $9 million in assistance from the Allegheny Conference on Community Development and the state. Two years later, Delta scaled the schedule back to summer-only.

“PIT is not a stronghold market for Delta like others in the Southeast U.S.” Swelbar said. “PIT is a oneworld alliance stronghold given that American/US Airways once operated a connecting hub that generates a significant number of frequent flyers. For PIT travelers, rather than use Paris seasonally to reach beyond destinations, now PIT travelers can use London year round to reach those very same destinations.”

British Airways is a member of the oneworld alliance.

Paris aside, Delta has continued to grow in the Pittsburgh market by adding nonstop service to Boston last year and Salt Lake City this year, and additional flights to New York (LaGuardia) in January 2019. The airline carries about 17 percent of PIT’s traffic, third-most behind Southwest and American.

“Delta remains an incredibly important partner,” Cassotis said. “Whether to continue the Paris route is something they’ve been considering for several years. That made it even more important that our passengers have additional options on British Airways, WOW and Condor, two of which are year-round.”

VisitPittsburgh CEO Craig Davis said that Pittsburgh’s appeal as an international player on the world stage has led to increased competition among carriers.

“As a group, we’re heading in a new strategic direction,” said Davis, referencing his organization’s close work with the airport. “We’re comfortable where we are right now – working with British Airways, Condor and WOW.”