What comes to mind when you think of Seattle? Amazon? Starbucks? A Tom Hanks-Meg Ryan movie?

How about direct flights from Pittsburgh?

To mark this occasion, let’s take a closer look at the similarities and differences between these two great cities. 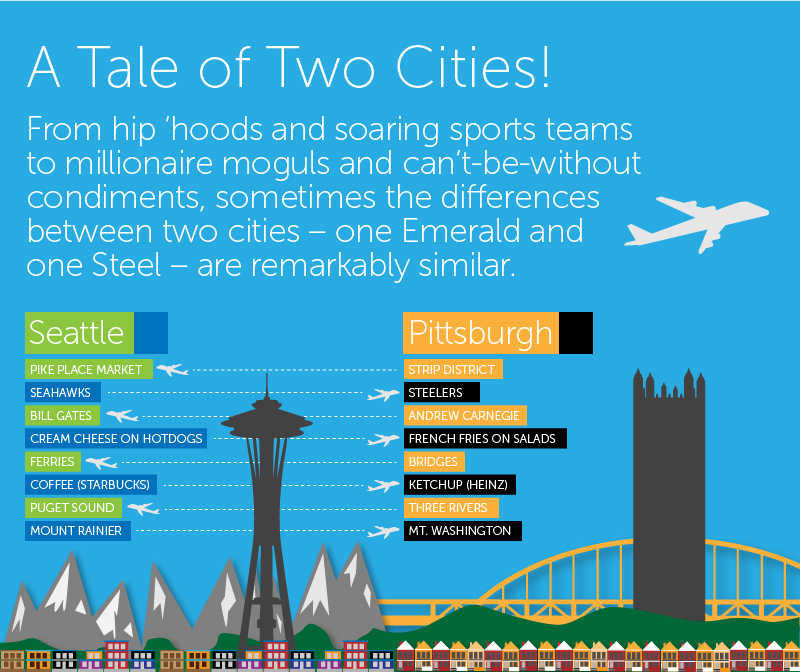 In Pittsburgh, Mt. Washington (accessed by a fun, throwback incline) provides what USA Today has characterized as “one of the best skyline views in the world,” said David Ruppersberger, president of the Allegheny Conference’s economic development marketing arm, the Pittsburgh Regional Alliance (PRA). “From Mount Washington one can see the Laurel Highlands, about 50 miles away, at least when the sun’s out. From the Space Needle, one can see Mount Rainier, at least when the sun’s out. Each experience is distinctive, and each is breathtaking.”

“Both Seattle and Pittsburgh are bustling, urban cities that are surrounded by gorgeous natural escapes,” said Tom Norwalk, President & CEO of Visit Seattle. “In both cities, you are surrounded by water and can find hikes within a stone’s throw of downtown.”

“Both Pittsburgh and Seattle are home to ever-growing tech industries,” said Craig Davis, President and CEO of VisitPITTSBURGH. “Seattle may have stepped into this industry a few seconds before Pittsburgh. However, with companies like Facebook, Uber, Google, Amazon and Argo AI, all with operations in Pittsburgh, along with a world-renowned robotics program at Carnegie Mellon University, Pittsburgh continues to stake its claim as a major competitor in the industry.”

Steel magnate “Andrew Carnegie wrote the ‘gospel of wealth’ and established a modern approach to philanthropy in the early 20th century when he was the richest man in the world,” Ruppersberger said. “His example has led other civic leaders to create foundations that benefit the region, providing Pittsburgh the second-largest concentration of foundation assets on a per capita basis — second only to Seattle, thanks to another ‘richest man in the world,’ Bill Gates, who is setting an example for the entrepreneurs from his community.”

“With its symphony, many museums and other cultural institutions — legacies from founding industrial families — Pittsburgh probably outranks Seattle,” Ruppersberger said. “Seattle may have an advantage with its number of artists and art galleries, which could help cultivate an even richer arts culture long-term.”

“Both cities are extremely family-friendly — from interactive museums to yearlong activities kids of all ages can enjoy,” Norwalk added.

According to Norwalk, the first thing a Pittsburgher should do when visiting his city is stop at Pike Place Market. “It’s often referred to as the soul of the city – you’ll find just about everything there, from fresh fish and produce to artisan goods and delicious grab-and-go food. And with the recent expansion, you get one of the best views of Elliott Bay from the new MarketFront. So grab a Piroshky Piroshky or a cup of the freshest clam chowder, snag a seat and enjoy the view while planning your journey through the city.” 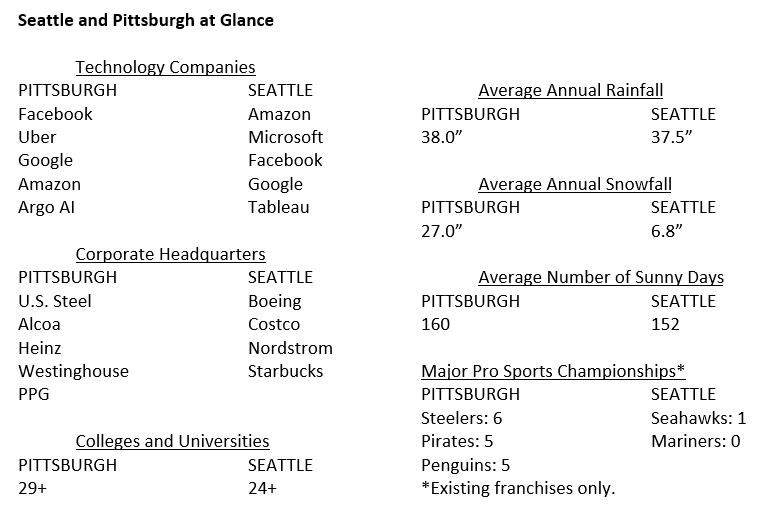 And what do proud Pittsburghers want Seattleites to see? “I’d suggest one of the many ways you can see the city from our iconic three rivers, including a riverboat tour on one of the famous boats in the Gateway Clipper fleet, or perhaps a bike ride along the Three Rivers Heritage Trail past Heinz Field, PNC Park and over to Point State Park,” Ruppersberger said. “The rivers provide a view of Pittsburgh like no other.”

Nonstop flights between PIT and SEA are important to both cities.

“We embrace any opportunity that makes Seattle more accessible to the rest of the world,” Norwalk said. “This new route will help connect us to a part of the country that we haven’t had direct connectivity to in the past. Both cities win! Residents in both cities will find much to love in their newest cross-country counterpart.”

As for the advantages to Pittsburgh, “We’ve got our eyes increasingly on the Pacific Rim, with companies such as StarKist (Korea), Elliott and Calgon Carbon (Japan) with headquarters or major operations here,” Ruppersberger said. “And Pittsburgh now has charter service to and from Shanghai, China. The Pittsburgh-Seattle flight makes us more of a player in the global economy and will support the growth of these companies in Pittsburgh and make it easier for other Asian companies to consider Pittsburgh for foreign direct investment.”