Quick – name the most romantic spot in Pittsburgh to get engaged. The overlook on Mt. Washington? The Jumbotron screen at PNC Park? Among the beautiful flowers of Phipps Conservatory and Botanical Gardens? All good choices.

But for 24-year-old Alexis Thomas of New Brighton, nothing beats baggage claim at Pittsburgh International Airport. 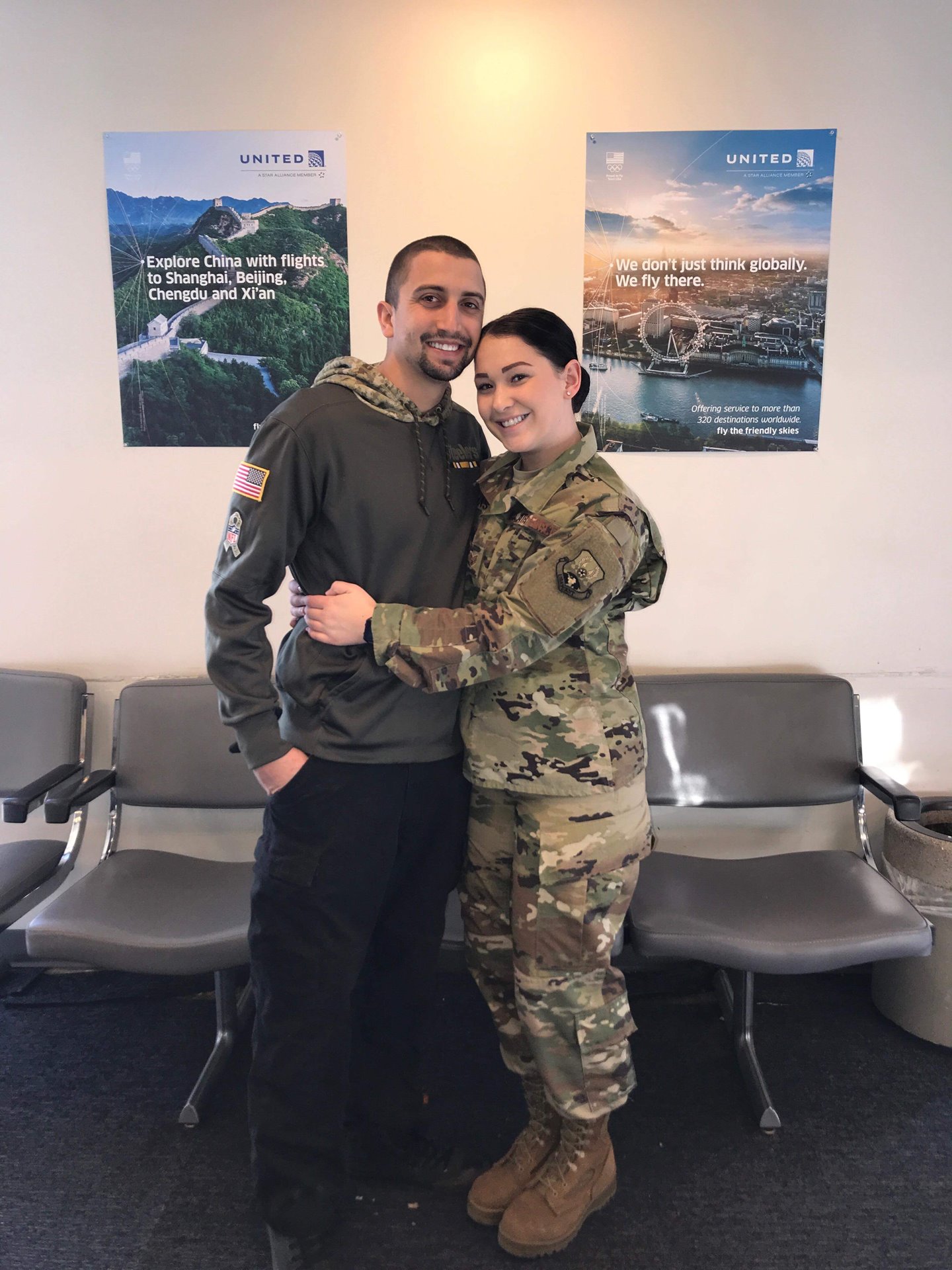 On Aug. 6, after a six-month deployment at Al Udeid Air Base in Qatar with the Air National Guard, Thomas traveled 20 hours – Qatar to Frankfurt to Baltimore to Newark – to finally reach Pittsburgh.

Exhausted but excited to be home, she stumbled out of the gate at 6:45 that evening to a surprise: her boyfriend, Shane Sullivan, standing a few feet away with a dozen roses, surrounded by members of her family and his. She ran from the jetway and jumped into Sullivan’s arms.

Sullivan and the two families had taken advantage of the MyPITPass Program to meet Alexis at the gate. (PIT is the only airport in the country to allow non-ticketed individuals Airside access for meeting and greeting loved ones.)

“I know how exciting it is to come home from a deployment,” said Sullivan, 29, himself a United States Marine Corps veteran of seven overseas deployments. “I knew she would be excited to see her family. I wanted to make this one special for her.”

As they walked to baggage claim, Thomas had no idea that her boyfriend had planned yet another special surprise. 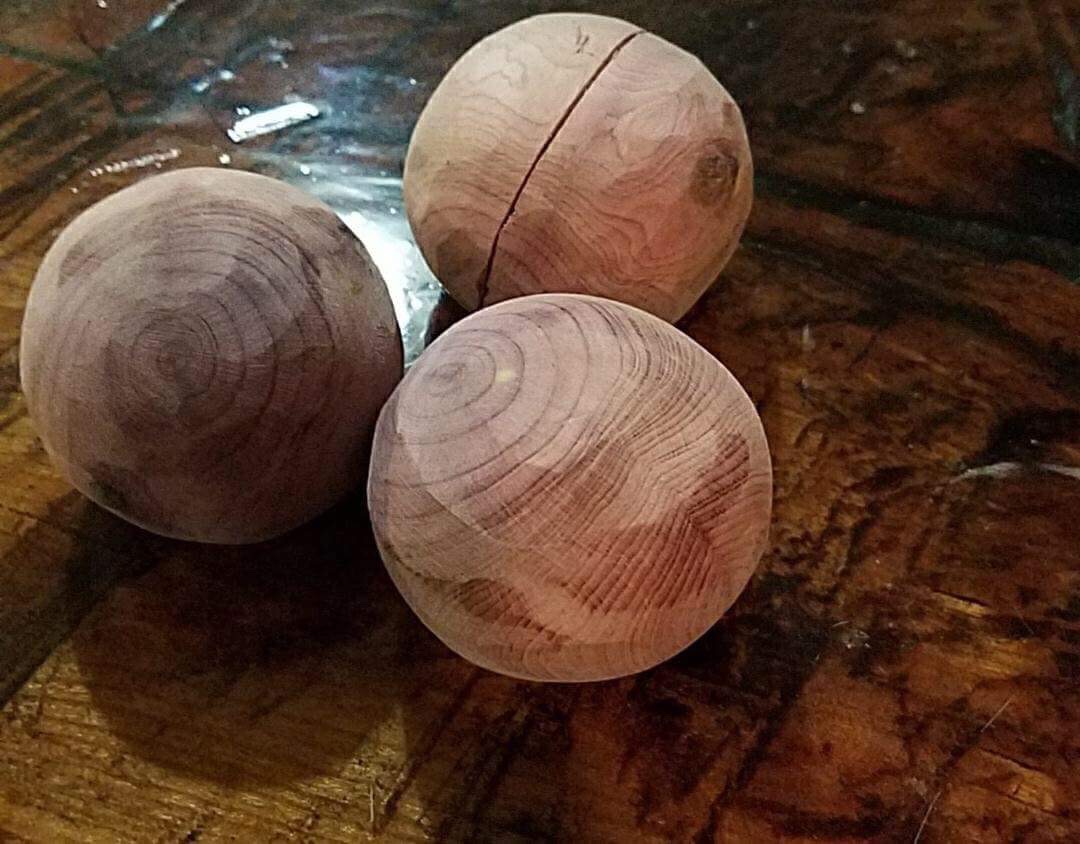 Alexis and Shane met five years ago, introduced by mutual friends at New Brighton High School. Just over a year ago, after Thomas came home from college at Indiana University of Pennsylvania, the two started dating. They had a lot in common, including a family history of military service.

“My mom was in the Army National Guard growing up, and I wanted to follow in her footsteps,” Thomas said. Coincidentally, her mom had been in the same unit as Sullivan’s brother.

From the beginning, she noticed that her beau was a man of many talents.

“Shane was always amazing me with how many things he can do,” Sullivan said. “From woodworking to cooking to graphic design to changing the brakes and rotors on my car, I thought there was nothing he couldn’t do! So I would always ask, ‘What can’t you do?’ His answer? ‘I can’t juggle.’”

Prior to leaving for six months, Alexis left Shane a few small gifts including a set of juggling balls. To impress his sweetheart, Sullivan decided to learn to juggle by the time she returned from Qatar. During the long months she was gone, he would send her videos of his attempts.

But Sullivan was also hatching a plan. He cuts trees on the weekends for his company, and one day he spotted a fallen purple feeder tree. He decided to carve three wooden juggling balls from the beautiful wood. He hollowed out one of the balls, split it in half, and installed magnets to keep it closed. That’s where he’d hide the ring.

As they reached the baggage claim, Sullivan brought out his handcrafted juggling balls and put on a little performance. It didn’t go according to plan. 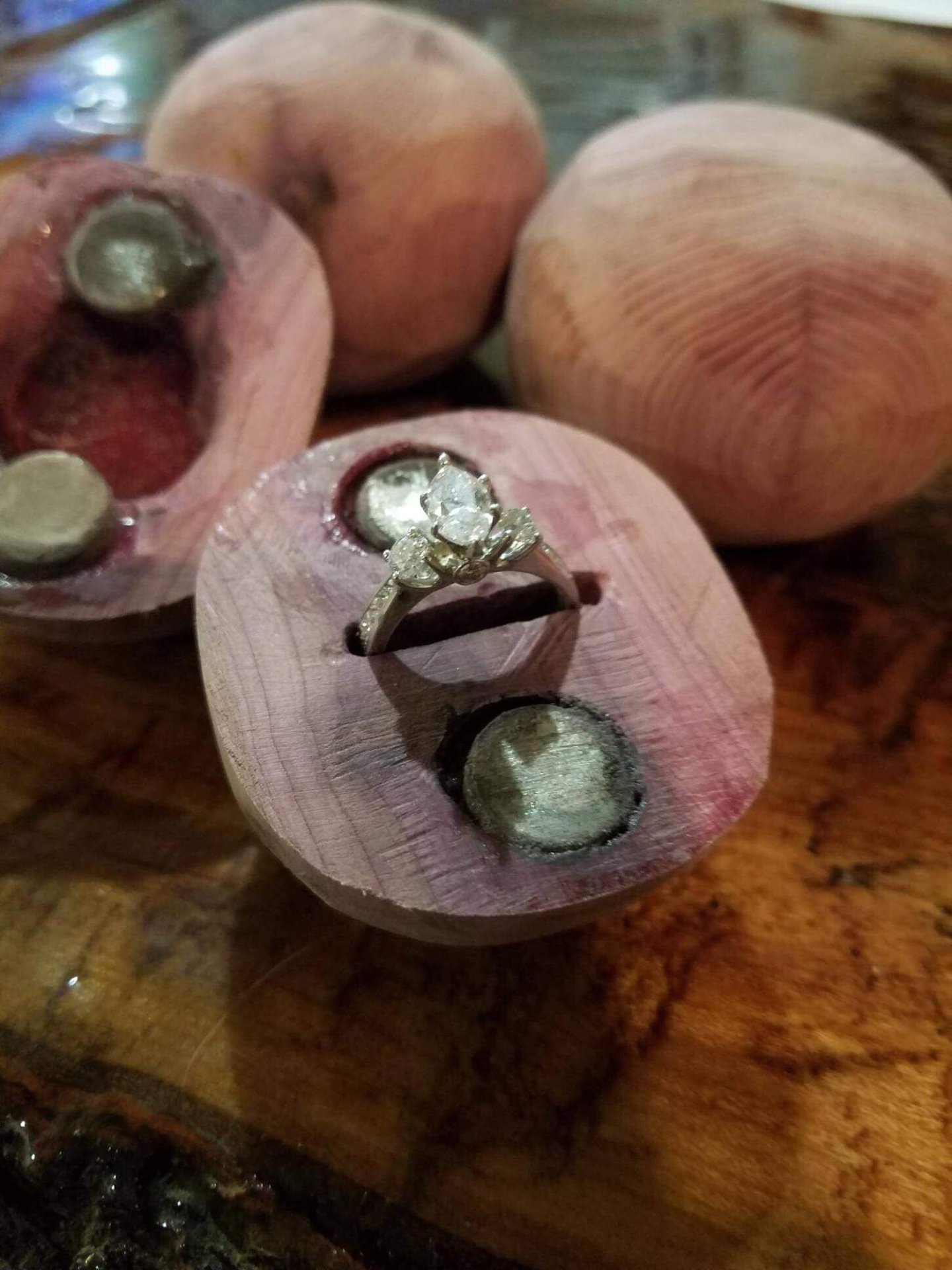 “I had not perfected my juggling, and as I started to juggle I dropped the ball that had the ring in it,” he said. “It went flying across the baggage claim floor. But I thought I still had the right ball. I gave it to her, but it didn’t open. I was shocked. Here were so many people watching and there wasn’t a ring in the ball.”

Thankfully, Shane’s sister retrieved the ring. Before anyone knew what was happening, Sullivan got down on one knee and popped the question.

“Of course I said yes!” Thomas said. “It was an amazing proposal.”

She gets out of the military in February; with no more deployments ahead, the couple are looking at wedding dates in fall 2019 at the Lodge at Brady’s Run Park.

After that? Who knows. But flying somewhere might make for an appropriate honeymoon.