For the sixth straight year, the cost of doing business for airlines at Pittsburgh International Airport will fall.

As part of the Allegheny County Airport Authority’s 2019 budget, the airport’s Cost Per Enplaned Passenger decreased to $10.35, a 31 percent decrease since peaking in 2011. 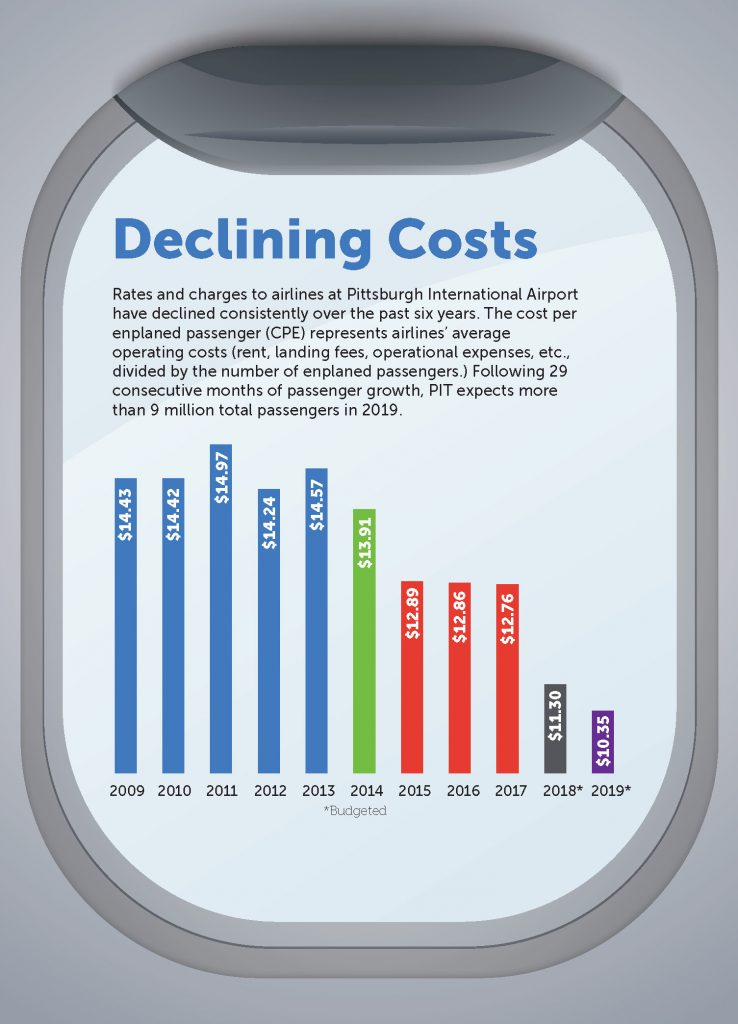 “What’s happening is we have a lot of growth — the more passengers, the bigger the base, the lower the cost. We are lowering our costs because we’re paying off old debt and we’re growing,” said CEO Christina Cassotis.

The ACAA board approved the $112.27 million budget at its regular monthly meeting in October. The 2019 budget is a 3 percent increase over this year’s budget.

The cost of an airline operating at an airport is typically less than 5 percent of its total costs, such as fuel, said Bill Swelbar, research engineer with MIT’s International Center for Air Transportation. But lower costs are an important indicator of the strength of a market, he said.

“What (also) is important is the airline’s view that respective airport managements have an eye toward maintaining or even reducing costs per enplaned passenger, even if only marginal decreases,” Swelbar said.

“The fact that PIT has now reduced its CPE for the sixth year in a row speaks volumes to an airline that management has their eyes on the prize of minimizing cost to the airline serving the airport.”

The Airport Authority also passed a $129.6 million capital budget for 2019. Most notable is the $75 million allocated for the Terminal Modernization Program, which is for design phase costs, including any projects such as relocations of airlines within the terminal.