When Qatar Airways Cargo touched down at Pittsburgh International Airport a year ago as the first-ever scheduled international cargo flight to the region, officials knew the potential could be considerable.

A growth in international cargo means additional jobs, expanded direct access to global markets and the potential to turn PIT into a logistics hub. And with Qatar flying twice-weekly service, cargo could get in and out of the region quickly.

One year after that first flight, the cargo flights fell short of their goal, but airport officials see progress and are optimistic for the future.

“Qatar has been a good partner as we worked together throughout the year,” said Allegheny County Airport Authority CEO Christina Cassotis. “Sure, we’d like to see even more local companies take advantage of the flights, but we know we’re not going to become JFK overnight. We have a long-term goal of becoming a regional logistics center that, coupled with our real estate development options, has the potential to be an economic driver for the region.”

Total cargo carried at PIT — domestic and international — is at 129 million pounds from January through October of this year, up 6 percent from the same period in 2017. In August, the airport hit its high-water mark so far this decade with more than 14 million pounds of cargo. 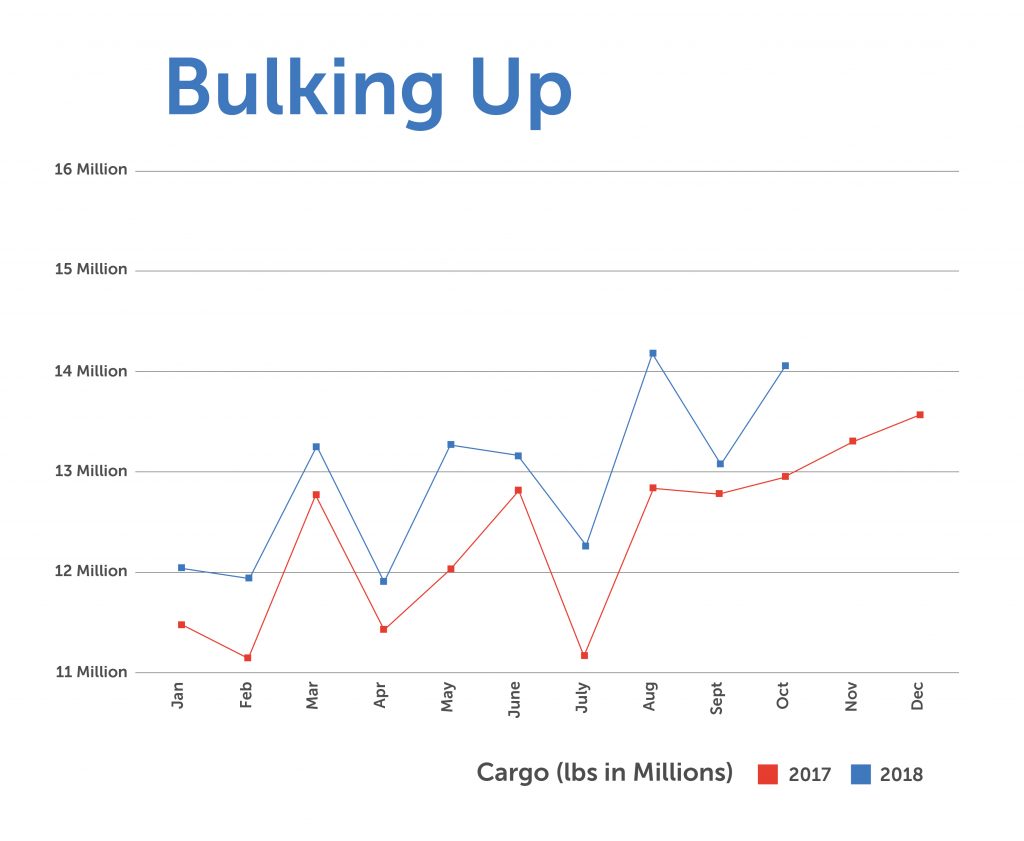 Among carriers, FedEx and UPS, which are classified as integrators, carry about 90 percent of the cargo that moves through the airport.

To help support the Qatar flight during its first 12 months, the airport paid an incentive package worth $1.48 million tied to performance goals. The airport would have paid less had the flights reached their tonnage targets of 60 tons per flight.

Still, an economic impact study commissioned by the authority found that the Qatar flights could produce nearly $43 million of economic output ($23 million direct) through increased trucking revenue from the additional activity in and out of PIT, increased demand for the warehousing/distribution center, and reduced transportation costs for businesses using the service, which they can then reinvest.

“We see our brand and service becoming increasingly popular among freight forwarders and customers in the region. They benefit from a direct freighter service to and from our global network of over 150 destinations. We have moved more than 1.1 million kilos in our first year of operation into Pittsburgh, and we expect Pittsburgh to remain a strong, strategic addition to the United States freighter network,” said Guillaume Halleux, Chief Officer Cargo at Qatar Airways.

“In addition, due to the strong handling structure in Pittsburgh, plus the uncongested situation of freighter operations, it presents us excellent opportunities for expansion.”

“The co-location of transportation and logistics facilities, that’s been a successful model in the U.S.,” Bañez said. “You start to get more activity related to trade and international trade and that can benefit the airport.”

Some local companies have taken notice. A Pittsburgh-based retailer recently brought in more than 100 tons of clothing on a Qatar flight. Marc Schlossberg, executive vice president of Hong Kong-based Unique Logistics, who helped arrange the deal, said Pittsburgh is poised to succeed. He described his job as a travel agent for boxes.

“When you look at the international logistics market, the major gateways have not invested in infrastructure and are overloaded. They might have 20 different airlines being handled by two or three ground handling agents and the service is abysmal,” Schlossberg said. “We see PIT as a faster solution with a similar footprint to Columbus, Ohio. It serves our customer base well.”

Rickenbacker International Airport in Columbus is one of the few airports that is not a major U.S. gateway but functions as a cargo hub. Schlossberg said the expansion of cargo service at PIT allows direct access to markets around the world to existing companies in the region while at the same time creating jobs through distribution channels.

“I think the model makes a lot of sense,” he said. “There are certain competitive advantages when you’re the only game in town. There’s less competition for infrastructure (at PIT), you can be wheels down (and) on the truck in six hours or less.”

At New York’s JFK, that could take 12 hours to two days, and a minimum of two to three days at Los Angeles’s LAX, Schlossberg said.

“Rickenbacker did not become a cargo hub overnight. It takes time to build the customer base and ground infrastructure,” Schlossberg said.

Aside from regional benefits, robust cargo service can provide important revenue streams to the host airport through landing and fueling fees, and other charges.

“We see over 75 wide-body aircraft a day. We’re the perfect stop between Asia and North America,” Wassel said. “All the ground handlers and service providers, they employ a lot of Alaskans.

“Cargo is an ongoing struggle at a lot of airports. … I think PIT is a great airport and there’s a lot of growth potential there.”