“Ladies and gentlemen, it appears as though this flight is over capacity. At this time, we are asking for one or two passengers to volunteer to take another flight in exchange for a travel voucher.”

Those words can send a chill through many business and leisure travelers waiting to board a flight in a crowded gate area. Others see it as an opportunity to score a free plane ticket.

One thing is for sure: More people are being “denied boarding,” the official term for those who have a confirmed reservation but are bumped from flights that have been oversold.

Almost 130,000 passengers were bumped on U.S. flights between January and March 2019, according to an Air Travel Consumer report from the U.S. Department of Transportation. Of those, 6,175 passengers were involuntarily denied boarding, while the rest opted to be compensated with a travel voucher for another flight.

And while overbookings are on the rise, they still represent only .3 percent of every 10,000 checked passengers, according to the report.

Part of the increase can be attributed to the grounding of Boeing’s 737 MAX 8, which forced airlines, particularly Southwest and American, to find replacement aircraft for those flights.

The number of passengers bumped on Southwest flights more than doubled, from 4,994 in the first quarter of 2018 to 11,590 this year. American Airlines reported similar increases, from about 28,000 denied boarding instances in 2018 to almost 47,000 this year across its network (which includes branded codeshare partners such as Piedmont Airlines, Republic Airways and PSA Airlines) this year.

In many cases, the airlines stopped scheduling flights that were operating with MAX 8 planes, said Michael Boyd, a Colorado-based aviation consultant.

“It’s a situation where an airline might have planned eight flights per day from L.A. to San Francisco and are now flying seven instead,” he said. 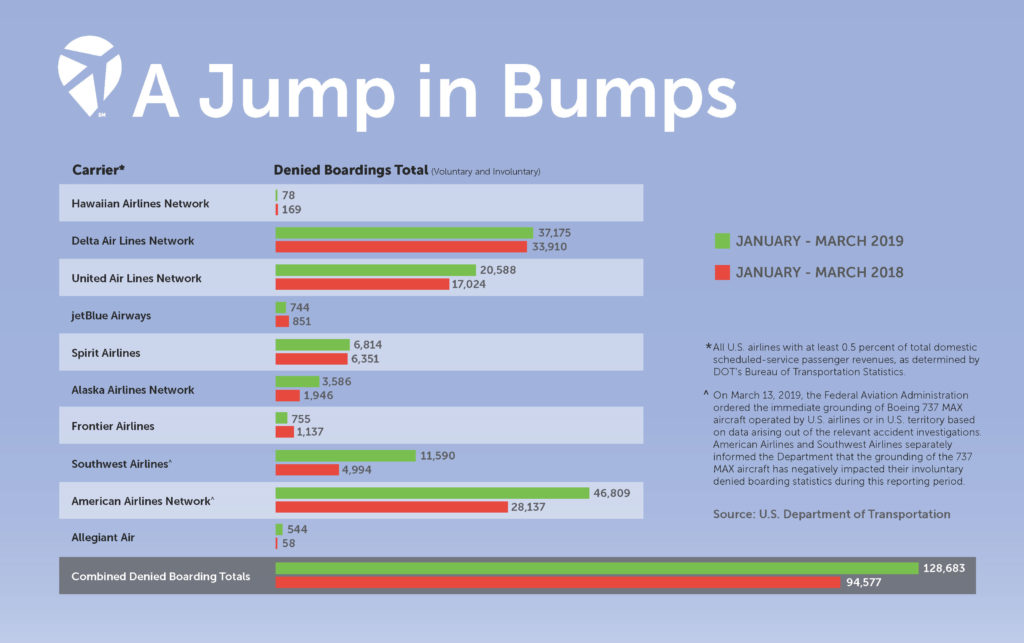 Southwest’s Q1 denied boardings increased by 0.25 per 10,000 passengers despite the grounding of its MAX fleet.

“All said, our operational teams did a fantastic job accommodating customers in the wake of the unexpected MAX grounding during Q1, and the minimal uptick is a testament to the Southwest team’s efforts to keep our customers’ travel plans as uninterrupted as possible,” said Southwest spokesman Brian Parrish.

Since Southwest doesn’t overbook, denied boardings are often a result of smaller aircraft being swapped onto a route during an operational disruption, he said. MAX 8s, for example, seat 175 compared to a 737-700 which seats 143.

Why do airlines overbook?

Overbooking is a sales strategy for many airlines. Figuring that some percentage of flyers will miss a flight or change their travel plans at the last minute, the airlines will oversell the number of seats on a given flight. Airlines are then legally allowed to “bump,” or deny passengers from boarding a plane, when there are no available seats.

In the case of an oversold flight, airlines are required to first ask for passengers to volunteer to be bumped before involuntarily denying a traveler boarding privileges. Additionally, the airline must offer some form of compensation for travelers that volunteer to take a later flight – typically a travel voucher or free ticket.

According to the transportation department, carriers consider many factors before involuntarily bumping someone from a flight: check-in times, fares paid by passengers and even frequent flyer status, among other criteria.

While passengers must be reimbursed for an oversold flight, airlines are not required to offer compensation when passengers are bumped due to substitutions in aircraft type and weight or balance restrictions, among other scenarios listed on the DOT website.

There are apps for that

American Airlines made similar changes to its mobile app in May. When using the app to check in, travelers can volunteer their seats, accept a travel vouchers and book later flights.

“It’s a really great program that is helping our customers know of the volunteer opportunities prior to heading to the airport,” said Andrea Koos, an American Airlines spokeswoman. “It also helps remove the need for gate agents to have to make the announcement at the gate because they already have a volunteer list in front of them.”

For Jamie Larounis, a travel industry analyst based in Reston, Virginia, the update to the American Airlines app is a convenient option.

Larounis said he used the new feature several weeks ago for an American flight from Dallas/Fort Worth, and said the app worked well in terms of offering a prominent notification that the flight was oversold and a quick process to volunteer to be bumped.

He experienced some glitches on the new app, he said, but it is definitely something he will use again.

“I have now made it a habit to both use the app and present myself to an agent,” he said.

JetBlue has fewer overbooking issues in general because of a long-standing policy not to oversell its flights, said Philip Stewart, manager of corporate communications for the carrier.  Between January and March 2019, 23 JetBlue customers were involuntarily bumped from flights (a rate of 0.03), while another 721 accepted travel vouchers.

According to Boyd, passengers are now more likely to arrive at the gate compared to the past because the majority of tickets sold today are nonrefundable. And while overbooking flights used to contribute to an airline’s revenue stream, that’s not really the case anymore.

“I think they are going to do continually what they do now, which is trying to adjust for what little no-shows they have,” he said.