Many of the headlines about the aviation industry over the past four months have focused on the plummeting number of travelers on major commercial carriers as airlines scramble to draw customers and stay afloat financially amid the COVID-19 pandemic.

But over the past couple of months, a smaller, less-visible segment of the industry has enjoyed a surprising rebound.

Air taxi traffic – a broad term that covers private business flights, typically operating out of smaller airports – has recovered remarkably well. In some cases, it’s exceeding the levels it was at this time last year.

At Allegheny County Airport (AGC), a general aviation facility 10 miles southeast of Downtown Pittsburgh in West Mifflin, Pa., June’s air taxi traffic was actually 12 percent higher year over year. That’s up from April when traffic there fell 46 percent compared to the year before.

In the first half of the year, AGC’s air taxi traffic was down only 15.5 percent, compared to 28.5 percent nationally. And at Pittsburgh International Airport, commercial passengers are down 56 percent year-to-date.

“I’m excited about the level of activity we are seeing at AGC. We remain cautiously optimistic about the COVID-19 recovery and the future of general aviation,” said Traci Clark, vice president, Allegheny County Airport. “During this time when commercial service is being reduced and destinations are being eliminated, general aviation is more important than ever to move people and supplies.”

Casey Schreiner, director of marketing and sales for Corporate Air, a fixed-based operator at AGC, said his company saw a rise in charter traffic similar to the rest of the industry over the past couple of months, particularly in their light jets, which can seat six to eight people.

“They had been a frontrunner in the pickup of activity around May, once charters started to really pick back up,” he said. “The light jets were being requested all over the place for those small domestic trips [for which] people didn’t want to shell out money for a midsize or a super-mid, or risk going on an airline.”

Others in the industry cite similar reasons for the surge: passengers who want to avoid being in close quarters with strangers in security lines and onboard aircraft. 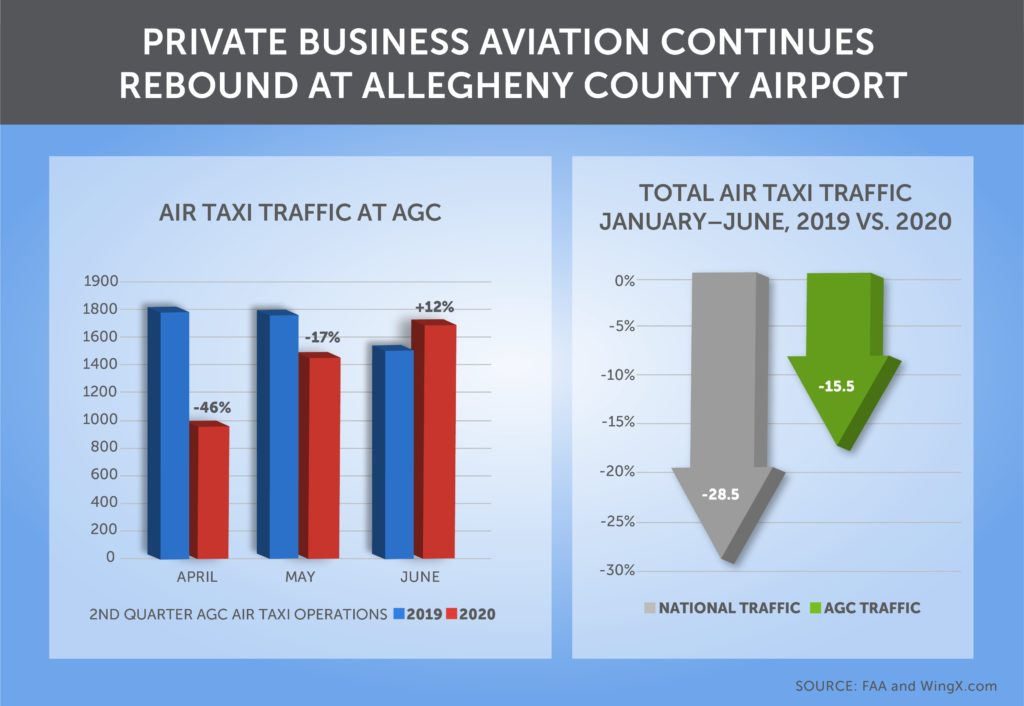 And with large companies like NetJets and Vista slashing rates in order to maintain business, as well as the suspension of a 7.5 percent federal excise tax on air transportation through January 2021 as part of the CARES Act funding legislation, private air travel is more affordable than usual.

“We are seeing some new customers pop in, those fringe people that probably have the means to travel privately and still were flying on the airlines,” Schreiner said. “A lot of people are probably jumping ship right now.”

However, much of that rebound was attributable to people wanting to travel to leisure destinations like Florida, which reopened before the rest of the country. Now, he said, Corporate Air is getting plenty of cancellations for Florida-bound flights because COVID infections have skyrocketed there.

Meanwhile, the business segment of Corporate Air’s customer base has remained sluggish, he said – a sentiment echoed by Ben Humbert, regional general manager for another fixed-base operator at the airport, Lynx.

He said Lynx’s business travel is still down 70 to 80 percent, but they’ve stayed busy with a resurgence in another sector of air taxi traffic: medical flights.

“(Medical flights) dropped off severely after COVID first came out, and I thought that was kind of strange. I thought they would have picked back up,” he said. “Then when Pennsylvania opened back up to do elective surgeries and other things, that’s where the medical helicopters really ramped back up again because everyone was playing catch-up.”

Lynx offers fueling and other services to medical air services based at AGC, which are intrinsically tied to healthcare, a pillar of the regional economy and a national focus as the U.S. struggles to get the pandemic under control.

Humbert said Lynx also saw an increase and subsequent decrease in charters to Florida, something he’s witnessed firsthand as he temporarily works out of the company’s Destin, Fla., location.

Like many companies, Lynx furloughed some employees early in the pandemic, but as business has gone back up, they’ve been called back. The Pittsburgh location is now fully staffed, he said.

“We want to make sure service and safety are back to where they were pre-COVID whenever things really get back up to business,” said Humbert, who must self-quarantine for 14 days when he returns from Destin. “So we brought a lot of people back to get them re-acclimated and retrained so whenever things start popping off we’re prepared and ready to go.”