New international all-cargo service touched down Monday at Pittsburgh International Airport, the latest step in the airport’s increased focus on cargo during the pandemic.

Typically, the Cathay Pacific Airways Boeing 777-300ER would be carrying more than 300 passengers. But on this occasion, the aircraft was filled with cargo.

Cathay Pacific flight CX8800 touched down at 9:45 a.m., arriving from Ho Chi Minh City, Vietnam, after a stop in Hong Kong. The flight is the first of 20 scheduled cargo flights operated by Hong Kong-based Cathay in partnership with freight forwarder Unique Logistics International.

The decision to operate out of Pittsburgh International was simple, said Fred Ruggiero, Cathay Pacific’s vice president of cargo, Americas.

“It’s easy to get in and out of the airport,” Ruggiero said. “Other airports are congested; it could take a whole day for a trucking company to pick up freight. In Pittsburgh, everything can be done within three hours. It’s a matter of time and ease.”

“You need to have the runways, the facilities and the cargo handlers in place, and Pittsburgh has that. We couldn’t bring in a Boeing 777 or other large aircraft to a smaller airport. PIT is kind of ready-made to operate a flight like this.” – Fred Ruggiero, Cathay Pacific vice president of cargo, Americas

Within hours of landing, 3,500 boxes of consumer goods will be offloaded from the aircraft and placed onto trucks heading for distribution centers along the East Coast, Southeast and Midwest.

“Pittsburgh sits within a 24-hour drive of about two-thirds of the U.S. population,” Schlossberg said.

“You also need to have the runways, the facilities and the cargo handlers in place, and Pittsburgh has that. We couldn’t bring in a Boeing 777 or other large aircraft to a smaller airport. PIT is kind of ready-made to operate a flight like this.”

For Pittsburgh International, the new service is the latest development in the goal of transforming the airport’s cargo facility into an international logistics center.

“Pittsburgh’s history is as a hub for transportation and logistics. We continue to have that industry as a core part of our economy, which is why I’m proud to welcome Cathay Pacific and Unique Logistics to our expanding air cargo portfolio,” said Allegheny County Executive Rich Fitzgerald. “We know now, more than ever, how important it is to move products around the world quickly and efficiently, and we look forward to both companies expanding their business in Pittsburgh. Air cargo has a direct impact on jobs, from those unloading the planes to the trucking companies taking the products to their destinations.”

Under PIT’s “Cargo 4 Project,” the new building will allow for larger aircraft, new cargo destinations on all-freighter aircraft or additional parking for integrator carriers like FedEx or UPS that require sorting facilities and high volumes of truck access. Airport officials expect that cargo capacity in the existing three buildings could be full in the near future.

Cargo continues to be a growing part of PIT’s business plan, according to Pittsburgh International Airport CEO Christina Cassotis.

“We are thrilled to partner with Cathay Pacific and Unique Logistics in expanding our cargo portfolios,” Cassotis said. “This is another step in building Pittsburgh International Airport into a global logistics center with world-class service. Our speed, efficiency and ideal location offer a unique benefit for carriers and freight forwarders.”

Cathay Pacific chose to operate the nearly 16-hour flight Hong Kong to Pittsburgh, the first scheduled flight on that route since at least 1990, on one of the airline’s four Boeing 777-300ER passenger planes that have been converted for cargo. A highly fuel-efficient, twin-engine aircraft, the “Triple Sevens” were converted in response to the global drop in passenger traffic caused by the pandemic.

“Necessity is the mother of invention,” Ruggiero said. “Passengers aren’t traveling nearly as much right now and cargo has been very busy for us. While we have large freighters, we also have a number of passenger planes parked.”

With 20 freighter aircraft in its fleet, Cathay Pacific is one of the largest “combination” carriers in the world, operating both passenger and cargo services.

By removing the seats in the 777s, the airline is able to carry cargo inside the cabin in addition to the belly of the aircraft. Cathay Pacific is also transporting freight with a number of other passenger planes that haven’t been converted for cargo.

“Our hard work is complete and this flight is already set up,” he said. “Cargo is all about finding solutions. Our job is to make it as seamless as possible for the shipper, and in this case, the solution is flying to Pittsburgh.”

The twice-weekly flights are scheduled to arrive in Pittsburgh on Mondays and Thursdays for 12 weeks and are slated to end in November.

“This entire process has had many partners along the way working in collaboration, which includes our federal agency partners of the Transportation Security Administration along with U.S. Customs & Border Protection,” said Vince Gastgeb, PIT’s Vice President of Government & Corporate Affairs. “Their involvement in helping to bring this project to a successful completion is very much appreciated.” 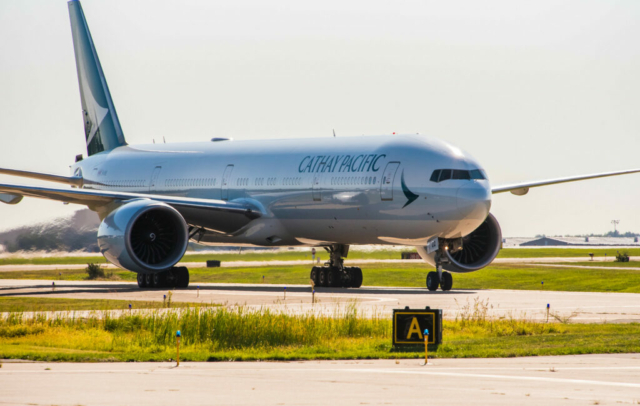 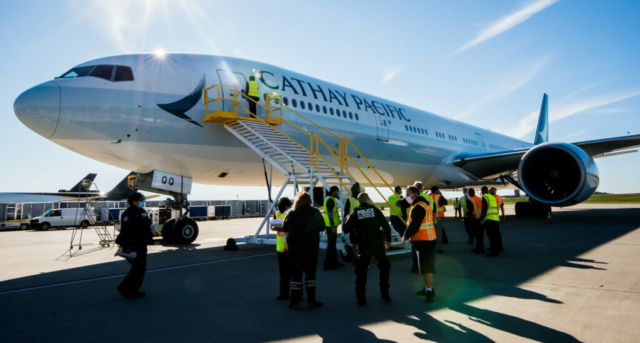 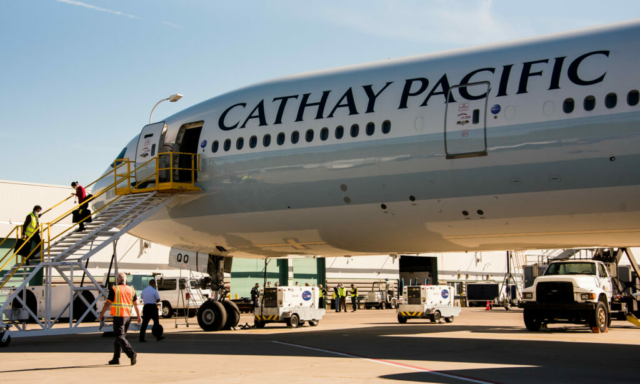 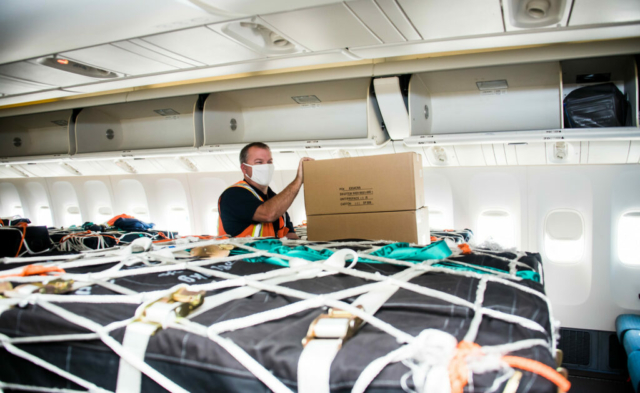 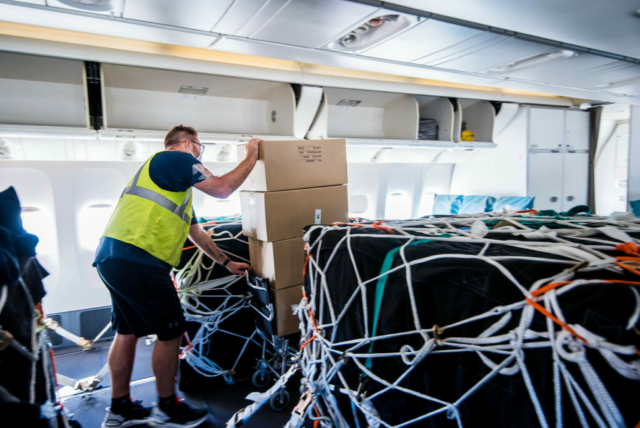 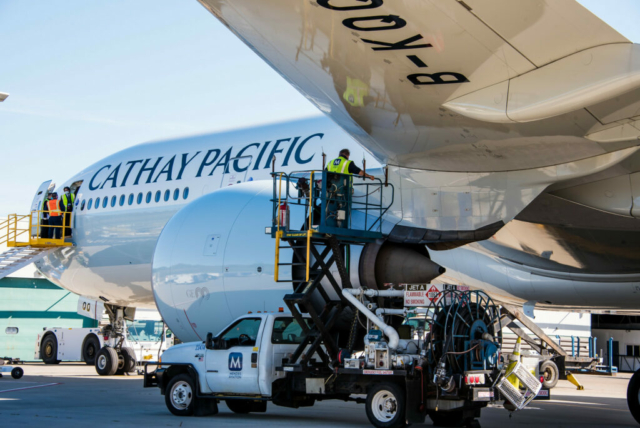 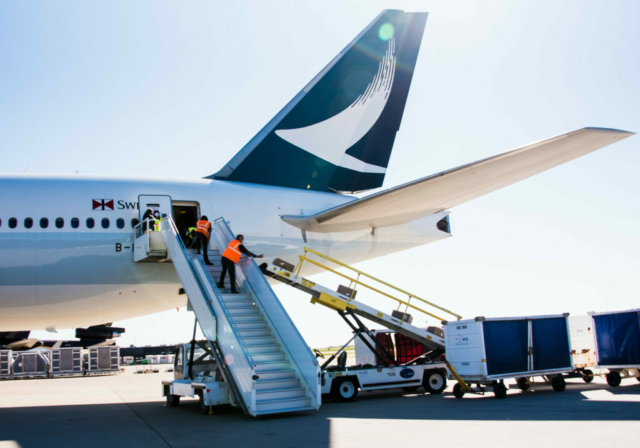 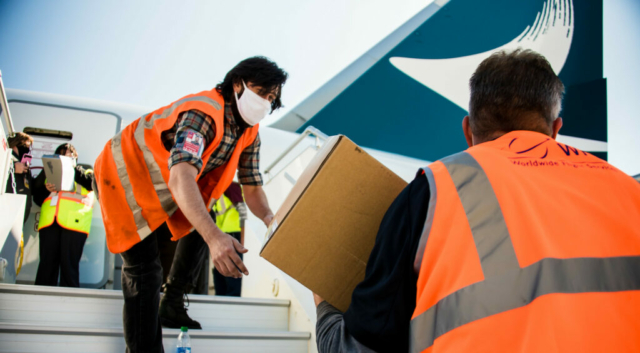 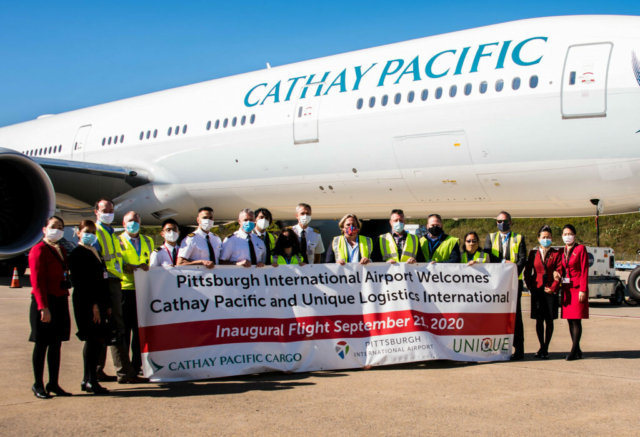