What started on a cocktail napkin turned into one of America’s largest airlines.

After a challenging first two years of operations, Southwest achieved what would be the first of 47 consecutive years of profitability. Thanks to a successful model of offering low-cost travel, emphasizing customer service and following a “point-to-point” route network, Southwest rapidly expanded beyond Texas throughout the United States.

It also used a simplified fleet to not only keep costs low, but to offer a consistent product to passengers. Since its start, Southwest’s entire fleet has featured the Boeing 737, albeit different versions. The airline is currently the biggest 737 operator in the world, with more than 700 of the type in service.

Southwest is also the largest low-cost carrier in the world and the third-largest U.S. airline in terms of passengers carried. By the end of 2021, it will serve nearly 120 cities in 11 countries.

Since May 2005, Southwest has steadily increased its operations at PIT, including the announcement of two new destinations last week: Austin, Texas, and Miami.

Initially, Southwest started in Pittsburgh with service to six cities. Over 16 years, that number has risen to its current 19 destinations. This year alone, Southwest has added new service to Sarasota, Fla., and Myrtle Beach, S.C. The Austin and Miami flights will operate between the Thanksgiving and New Year’s Day holiday seasons.

It has also restored service to destinations suspended because of the pandemic. In June, Southwest brought back nonstop flights to St. Louis, Dallas and Houston. In addition, it resumed Saturday-only service to Cancun, Mexico, this past weekend.

Southwest’s rapid growth is what brought the airline to Pittsburgh International Airport in the first place. Its arrival was met with enthusiasm from passengers, who gained better access to lower fares and more nonstop options following the airport’s post-hub era.

John “Flash” Williams, Customer Service Supervisor for Southwest at PIT, was there for the first day of operations.

“Initially, we weren’t sure how well we would be received,” he said. “Turned out, it was very exciting for the people of Pittsburgh. We even had employees from the other airlines here embrace us warmly.”

Williams, a native of the Pittsburgh area, had worked for Southwest in Reno, Nev.; San Francisco; and Phoenix before coming back to Pittsburgh. Returning to his hometown was an easy decision.

“I felt like it offered me a chance to come home and be closer to my family,” he said. “When the bid opened up for the Pittsburgh station, it was an opportunity I couldn’t pass up.”

Ramp Supervisor Joe Rose has also been with the Southwest team at PIT since day one. Like Williams, Rose returned to Pittsburgh because of family ties to the area—he had previously been with the airline at Chicago-Midway, Baltimore and Columbus, Ohio.

“Employees were just as excited as our passengers were,” he said. “You had a lot of people that wanted to be here. That is what made working those first flights very fun.”

At the end of 2020, Southwest carried 26.3 percent of total passengers at Pittsburgh International—the most of any airline. Year-to-date through April, the airline’s market share has increased to approximately 30 percent.

Despite Southwest’s growth, one thing hasn’t changed for the company’s longest tenured employees at PIT: being able to help others.

“I have helped passengers on some of the worst days of their lives. It always feels great to be that silver lining for them and turn their day around in a positive way,” Williams said. “That, to me, is what is most meaningful.” 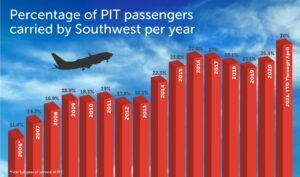