Passenger traffic nationwide has started to tick up in recent weeks but remains about 25 percent below where it was before the COVID-19 pandemic.

Airlines for America, an airline industry group, updates key industry metrics weekly on its website including nationwide passenger traffic by week; airline load factors, which indicate how full an airplane is; and airline revenues.

The data indicates airlines had a strong summer travel season but need to make up more ground to reach 2019-like numbers. 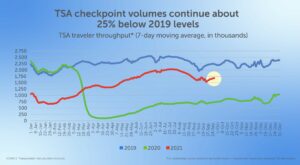 “Leisure travel, by the way, has been strong since the beginning of this year, since March, and remains strong. We’re actually, versus 2019 … in terms of leisure demand, we are as high as we were in 2019. So, leisure demand is strong. It has remained strong even since the increase in cases of the (Delta) variant,” Parker said.

“What’s slowed is business demand, and it was what was really coming back. So again, at the time of our earnings announcement, which was mid-July, we had seen business travel increase from about 25 percent of where it had been in March of 2021, and it increased over 50 percent by June. In July, it actually increased to 65 percent. So, it was coming back very quickly. As the variants increased the number of cases, we have seen that pull back.” 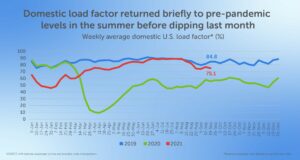 And of course, more passenger traffic translates into more revenue for airlines. While airline operating revenues remain down compared to 2019, they’ve made steady progress over the past year. 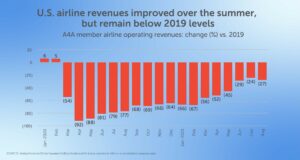