Keezer flies often for her job as the Pittsburgh Film Office director and has spent many moments in baggage claim. None were as memorable the time she watched a scene being filmed there for the 2000 hit movie “Wonder Boys,” starring Michael Douglas and Downey.

“All (Downey) had to do was pick up this elaborately decorated case from the conveyor belt. But the director, Curtis Hanson, was a stickler for detail and they must have done at least 15 takes,” Keezer recalled. “One time he’d tell (Downey) the lighting was off. The next time he’d say the angle was wrong. They were there forever.”

Keezer provided a theory as to why the airport has proven to be an attractive location for producers and directors.

“The (staff) there has always been very supportive and cooperative,” Keezer said. “The terminals have always been great (locations) for people from L.A.”

The airport most recently was used in Netflix’s new show about academia starring Sandra Oh, “The Chair,” which filmed there earlier this year. 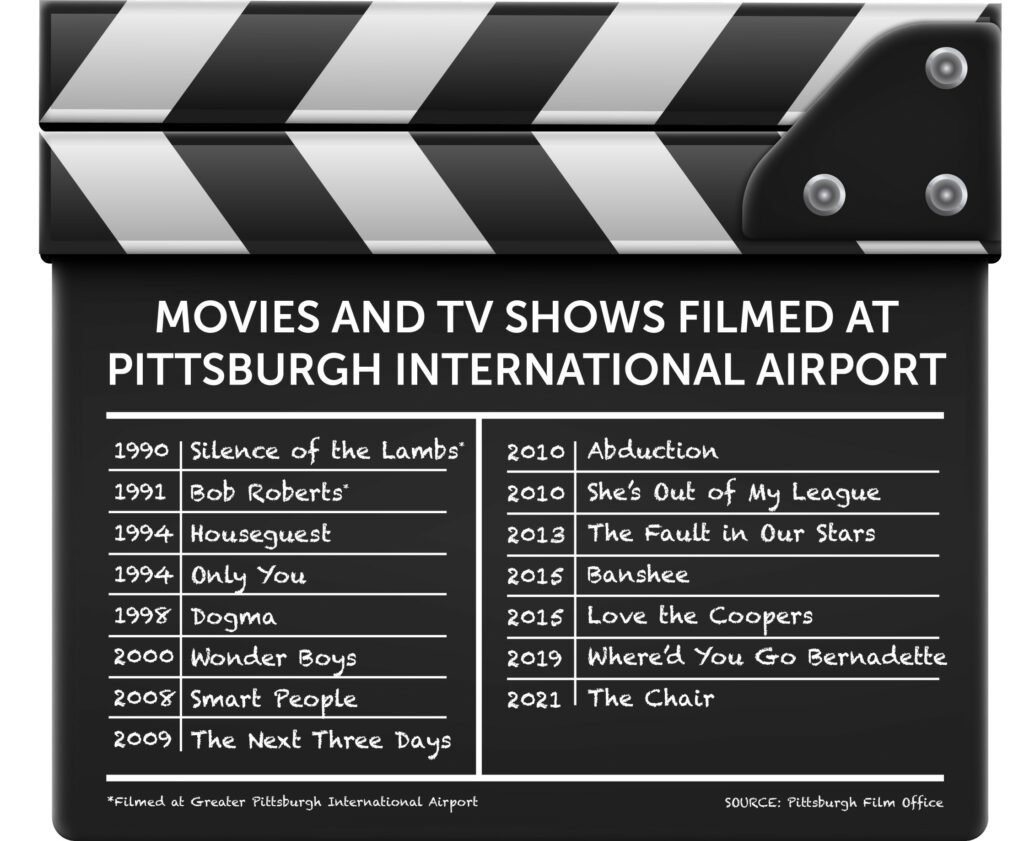 The old terminal also was used in 1991 for the Tim Robbins political satire “Bob Roberts,” before Hollywood became acquainted with the charms of the current facility. Since then, some of the entertainment industry’s biggest names have made movies that involved shooting at the airport.

“Houseguest,” a comedy starring Sinbad and the late Phil Hartman, shot scenes at the commercial arrivals curb and the Ambassador desk in the baggage claim area in 1994. Ben Affleck and Matt Damon used Concourse C in 1998 for their fantasy-comedy “Dogma.”

“She’s Out Of My League,” filmed in 2010 at the Landside Terminal ticketing area, the alternate security checkpoint and the roof of the building adjacent to the employee parking lot. The romantic comedy featured the lesser-known Jay Baruchel and Alice Eve.

“Where’d You Go, Bernadette,” the 2019 Care Blanchett-Kristen Wiig comedy, used the airport for a scene on a Delta Air Lines plane.

According to the film office, the airport also has been featured in the 1994 Marisa Tomei rom-com “Only You”; the 2008 Dennis Quaid comedy-drama “Smart People”; the 2009 Russell Crowe slugfest “The Next Three Days”; the 2010 Taylor Lautner action vehicle “Abduction” and the 2014 teen tearjerker “The Fault In Our Stars.”

As far as future filming opportunities go at the airport, Keezer sees a bright future – particularly when the $1.39 billion terminal modernization project is completed in 2025.