Gearing up for the fall season, airlines are bringing five nonstop routes back to Pittsburgh International Airport.

The additions represent a mix of warm weather and Western destinations for travelers likely looking to escape the upcoming cold months ahead.

JetBlue also announced that it plans to increase nonstop service to Boston up to five times a day on select days of the week starting Sept. 8, the highest daily frequency since the onset of the pandemic.

Additionally, the airline will introduce the Airbus A220 on the route beginning Oct. 30, which will increase the number of available seats.

Frontier also plans to increase Denver service to six flights a week from Sept. 8 until Nov. 15, before service ends for the season and shifts to Orlando. 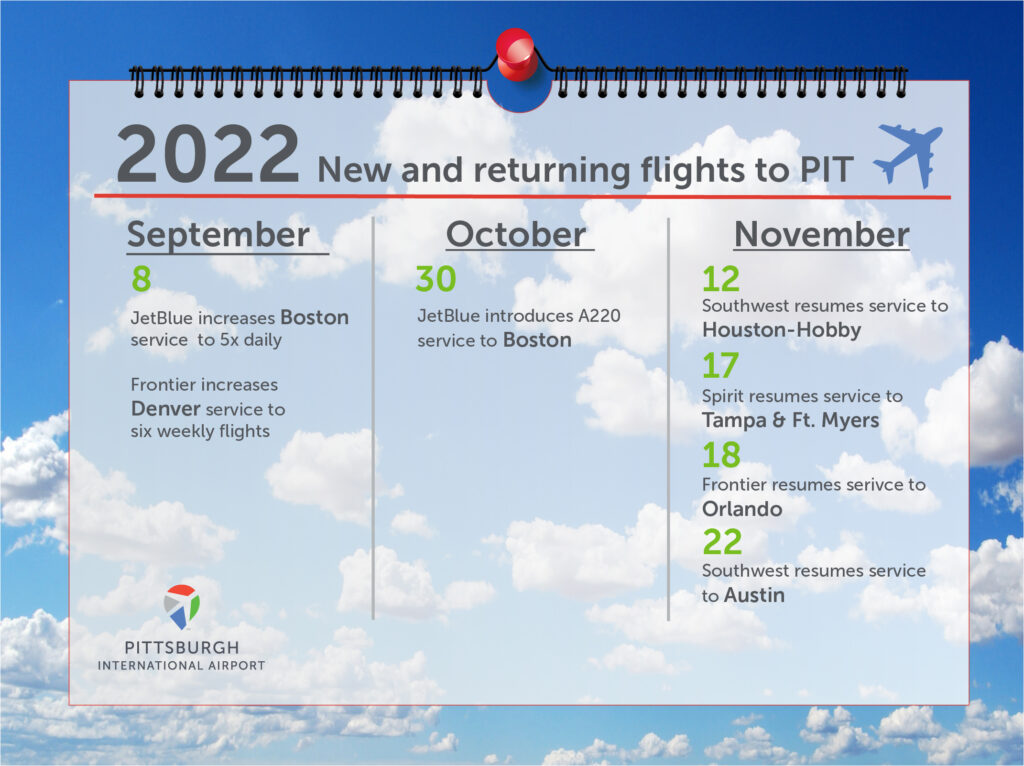 Overall, travel nationally continues to be strong, although it is not regularly eclipsing 2019 figures. After a summer plagued with higher-than-normal flight cancellations, airlines have slashed routes across the country as they struggled with crew shortages stemming from the pandemic.

Carriers including Southwest have said they don’t see signs that travel appetite is cooling off. Southwest said leisure bookings are still strong, in line with what it would expect for this time of year, The Wall Street Journal reported.

What will happen after summer, when vacation travel slows and business travel picks up, has been the subject of industry debate.

Southwest said that business bookings have been encouraging so far. The airline expects business revenues to be down 17 to 21 percent compared with the third quarter of 2019—before the pandemic caused travel demand to plummet, according to The Journal.

Delta officials said last month that domestic business demand was at 80 percent of 2019 levels, a figure echoed by both American and United.

“As we get toward the end of summer into the more traditional business travel season … we’re going to see an uptick in corporate travel,” Delta’s president Glen Hauenstein said on an investor call, according to The Points Guy.

TSA national screening statistics show checkpoint counts near pre-pandemic numbers and surpassing them on a handful of days, most recently on July 1, when approximately 2.5 million people were screened, up from 2019’s figure of approximately 2.2 million travelers.