Since 2005, arriving passengers at Pittsburgh International Airport have been greeted by the statue of Pittsburgh Steelers Hall of Fame running back Franco Harris, in the iconic pose of the Immaculate Reception – the greatest play in NFL history.

On Wednesday, travelers flocked to the statue to bid the legend goodbye.

Harris, whose shoestring catch forever altered the Steelers’ destiny, setting them on the road to becoming one of the NFL’s most storied franchises, passed away Tuesday night, three days shy of the 50th anniversary of the Immaculate Reception. He was 72.

To accommodate travelers wishing to pay their respects, the statue has been placed in front of the Christmas tree in the airport’s center core, with a table nearby where visitors can sign a condolence book. Those messages will be given to Harris’ family.

Like everyone else in Pittsburgh, the airport community had been enthusiastically celebrating the upcoming anniversary of the Immaculate Reception – a deflected pass that Harris scooped up and ran for a touchdown to give the Steelers an improbable playoff victory over the Oakland Raiders.

Passengers and Allegheny County Airport Authority team members had been participating in the NFL’s “#Francoing” campaign on social media, posting pictures of themselves posing like Franco in front of his statue. It was all leading up to Christmas Eve, when the Steelers planned to retire Harris’s jersey during the team’s match-up against the Raiders, who now call Las Vegas home.

“Few people have epitomized this city as much as Franco Harris. How fitting that his statue welcomed Pittsburghers back home from their travels, a hallmark of the Pittsburgh International Airport experience,” said ACAA CEO Christina Cassotis. “Franco was a true friend and community partner to many of us, and we extend our heartfelt sympathies to his family and to everyone who held him dear.”

In 2019, the statue was temporarily removed to be refurbished by the Heinz History Center, and Harris came to PIT to mark the return of his likeness. ACAA electrician David Pradetto seized the moment to ask Harris to sign the “Franco’s Italian Army” shirt that Pradetto’s father had given him when he was a kid.

“He said, ‘I haven’t signed one of those in a long time.’ But he signed it for me. It made my day,” Pradetto said Wednesday.

Butler native Tom Collins flew into Pittsburgh on Wednesday afternoon from Houston to visit family and attend the Steelers game Saturday night. Dressed in a Franco Harris jersey, Collins, 51, learned of Harris’s passing as he headed to his connecting flight in St. Louis. When he came to the statue, he kneeled and touched the football that is gripped in the statue’s hands.

“I was planning on a taking a much more joyful picture,” said Collins, praising PIT for giving Harris a place of honor. “It’s a wonderful tribute.”

John Foust, 75, now lives in Las Vegas but is a Pittsburgh native who attended the Immaculate Reception game with his father, who had purchased season tickets the previous year. “It was unbelievable. It was bedlam,” said Foust.

Also in the stands at Three Rivers Stadium on that fateful day was Betty Webb, 95, traveling through PIT on Wednesday morning with her family. Her husband was a die-hard Steelers fan, and she was still reeling from the news that Franco is gone.

“The timing of it was most shocking. Right before the big game and the 50th anniversary of the Immaculate Reception. It’s sad knowing he was going to be there and experience all that,” said Webb.

Like many fans, Lula Hartman, 74, loved Harris for sticking around Pittsburgh after his playing days were done. She made her way to the statue before catching a flight to Philadelphia to visit her daughter.

“He was an awesome person. I’ve been in Pittsburgh 40 years, and he’s been the same Franco all that time. I’m so thankful I got to be here this morning,” said Hartman. 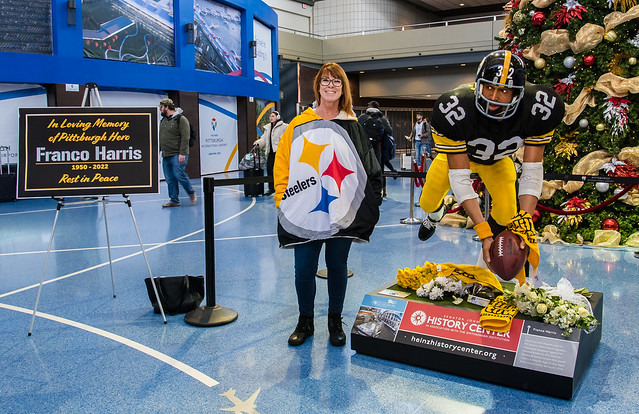