On a recent Wednesday afternoon, Blaine Siegel, sporting his self-created uniform of charcoal gray pants and a shirt that reads “AIR PIT,” headed down to baggage claim, where limo drivers hold wipe-off boards and iPads bearing the names of passengers they are picking up.

Siegel’s board had a different message: “Waitin’ here to talk with you.” On another was, “I’m here to listen to you.” 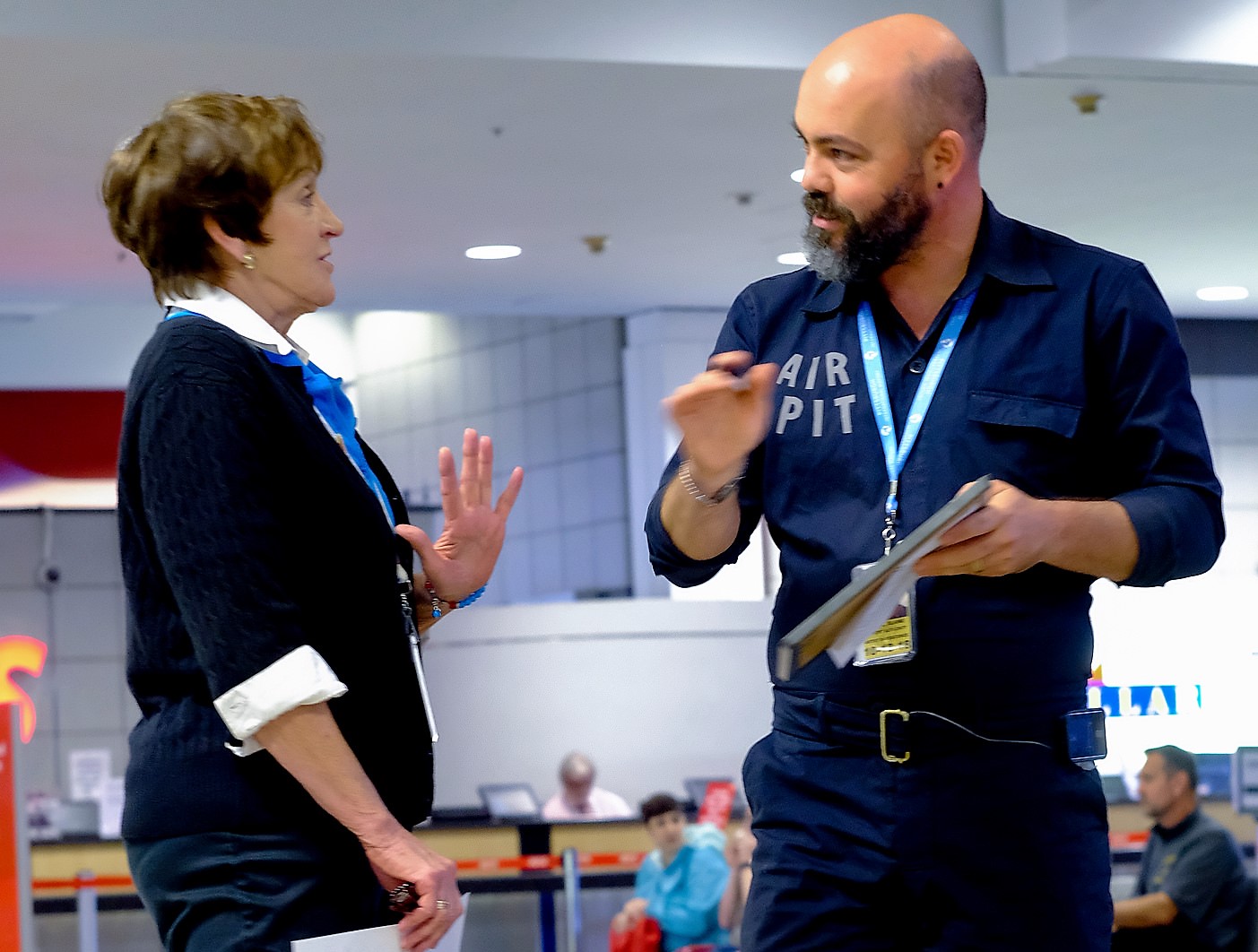 Siegel is Pittsburgh International Airport’s first artist-in-residence, and these days he is busy engaging with passengers, employees and airline staff whenever possible. The wipe-off board is his way of doing things differently.

“One of the roles of an artist is to change the everyday experience to make people look at things differently,” he explained. “If I’m standing there with a wipe-off board, and they read it, they’ll stop and think for a minute. I’m asking people to come out of their shell and talk to me. Some people will.”

PIT is one of about a dozen airports in the world that have hosted an artist in residence.

The approach allows both the artist and the airport to develop projects they couldn’t do on their own, said Sallyann Kluz, director for the Office of Public Art at the Greater Pittsburgh Arts Council.

“It gives the airport team the opportunity to view the creative process as it moves forward and to view their own work through an artist’s lens,” Kluz said. “What we have seen in past residencies is that there is lasting impact on the host organizations, not only from the creative project but that the process of seeing an artist work informs changes in their own processes in a positive way.”

Finding hidden gems at the airport

Siegel will make that determination by immersing himself in PIT’s culture and seeing life at the airport through an entirely different lens than most.

For example, PIT maintenance personnel routinely test the machine for painting lines on the runways. Testing takes place on a designated piece of ground. To most, the testing area looks like a maze of confusion – lines zig zagging and overlapping one another without any sense of purpose.

For Siegel, seeing that testing ground was like finding a hidden gem.

“They blast paint out on this parking pad, and it changes every two or three weeks, which is just fascinating and beautiful,” he said with his trademark exuberance. “I have been photographing it non-stop, and every couple of weeks they repaint it.

“Each time I go back, it’s a completely different landscape. It’s little beautiful things like this that happen at the airport that do not get a lot of attention. I love experiencing that.”

Check out Siegel’s Instagram posts for more behind-the-scenes airport photos and a glimpse into his other discoveries. 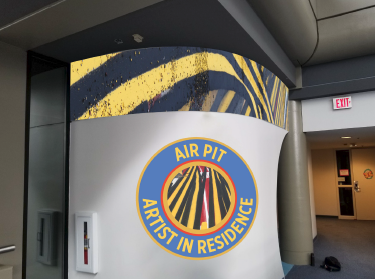 Visit the artist’s studio at PIT

Airport visitors can check out Siegel’s studio on the Mezzanine Level of the Airside Terminal on Tuesdays and Thursdays beginning Aug. 2, where they can see an assortment of the treasures he collected during the discovery phase of his residency.

Quotes from employees are scribbled on a white board and are joined by photos of the line painting that has captured his interest. On a nearby table are three small pieces of asphalt, neatly stacked, each showing layer upon layer of yellow and white paint that Siegel picked up from the line painting area. A jar on the table labeled “Tomb Crystals 3/21/18” sits next to various baggage tags.

Many of these appear to be throw-away items, but to Siegel, each represents the seed of an idea he has yet to explore and a potential art creation in the making.

Soon, Siegel will enter the testing phase of his residency. He’ll take the themes he’s observed and the treasures he’s collected and begin to formulate ideas for his art piece that, when finished, will be on display at the airport for two years.

For now, the entire airport is his canvas. His mind is wide open and filled with ideas and possibilities. Part of being an artist in residence at PIT is working out in the open. You might say he is part artist and part PIT ambassador.

In a separate initiative, Siegel is one of 20 artists recently awarded a “Keyword: International” grant from the Kelly Strayhorn Theater and Carnegie Museum of Art to creatively research and define the many meanings of the word “international” for Pittsburgh. As part of that grant, he and a collaborator are interviewing refugees who come through the airport to help create a more welcoming experience.

“Being an ambassador for the arts falls very easily to me,” Siegel said. “I think it’s very important in society, so whenever I can introduce the arts to people in a way that makes it a bit more accessible, I think that’s really valuable.”

Along with other Keyword artists, Siegel will present his “international” findings on Oct. 20, 2018. In culmination, a commissioned text will be published in the 2018 Carnegie International catalogue. One of the most historic exhibitions of contemporary art in the world, the Carnegie International has been taking place at Carnegie Museum of Art in Pittsburgh since 1896.

So if you see a guy walking around the airport with charcoal pants and a charcoal shirt that reads “AIR PIT,” stop by and say hello. You just might end up being the inspiration for Siegel’s next art project.