As you board the trains between the Airside and Landside Terminals at Pittsburgh International Airport, listen up. You never know whose voice you’ll hear.

The airport’s Voices of Pittsburgh program features local celebrities, business executives and non-profit leaders delivering not only safety messages like “please hold on,” but also a bit of the mission of their organizations and why, in this town, we’re all “Pittsburgh Proud.”

“Get on the fast train, Grandma, the bingo game is ready to roll!” exclaimed Mike Lange, radio voice of the Pittsburgh Penguins — a slight twist on one of his signature calls. Lange, along with KDKA-AM morning show host Larry Richert, were the first two Voices of Pittsburgh in June of 2016; Lange cheered on the Pens in the Stanley Cup Final and Richert welcomed fans to the U.S. Open. 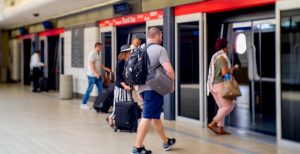 Lange and Richert certainly caught the attention of passengers. Now, while holding on and trying not to interfere with the personal space of fellow travelers, you’ll see riders listening to hear just who is delivering the message. The voice varies from week to week, and sometimes day to day.

“The program has been very successful and popular,” said Brian Stashak, vice president of Terminal Operations for the airport. “We have received lots of positive feedback — especially when someone like Mike Lange or (Steelers radio announcer) Bill Hillgrove  has been on the train.”

But it’s not just local celebrities that get the audio love; non-profit organizations are also providing messages.

“Every day I got an e-mail, text or phone call from someone who heard the announcement,” said Anne Flynn Schlicht, director of the Women’s Business Center for Entrepreneurship at Chatham University. “This is a great service to provide to non-profits and to promote the region.”

“We are constantly looking at ways of creating a sense of place at the airport,” Stashak added. “What better way to have Pittsburghers talk about Pittsburgh in a fun, creative and informative way?”

Since Lange and Richert delivered their messages a little more than two years ago, about 40 others have lent their voices to the train ride. Many of their recording sessions are available to view on the airport’s website.

If you would like to nominate a nonprofit leader to participate in the Voices of Pittsburgh program, contact Jeff Martinelli at Jmartinelli@flypittsburgh.com.

Here is a highlight list of some of the people who have provided the Voice of Pittsburgh since June 2016.