Many airport codes are straightforward: PIT for Pittsburgh International, BOS for Boston Logan … even LGA for New York’s LaGuardia makes sense. But many others have strange three-letter codes that defy logic, and behind each of those codes is a story.

MSY, in New Orleans, is one of those stories. The code comes from early aviation pioneer John Moisant, who crashed his plane in a nearby field in 1910. After his death, the 3.82 miles of property became a cattle stockyard and was named after him.

When the airport was built near the stockyards, the name stuck. Eventually, the Moisant Stock Yards gave way to New Orleans International Airport, and finally to its current name in honor of jazz icon Louis “Satchmo” Armstrong. But the airport code stayed as MSY.

In 1942, the U.S. War Production Board purchased a 1,790-acre plot of underdeveloped orchard land outside of Chicago. The area was called Orchard Place and was used as an aircraft manufacturing site for the Douglas Aircraft Co.

The first airport there was known as Orchard Place/Douglas Field and was designated by the code ORD. After the war, the airport land was transferred to the City of Chicago and renamed Orchard Field. In 1949, the airfield was renamed in honor of Lt. Commander Edward O’Hare, a young Navy fighter pilot shot down in the Pacific in 1943.

“While ORD might not be an obvious call sign for Chicago O’Hare International Airport, it’s a meaningful one that tells a lot about the airport’s history and how far we’ve come,” said a spokeswoman for the Chicago Department of Aviation. 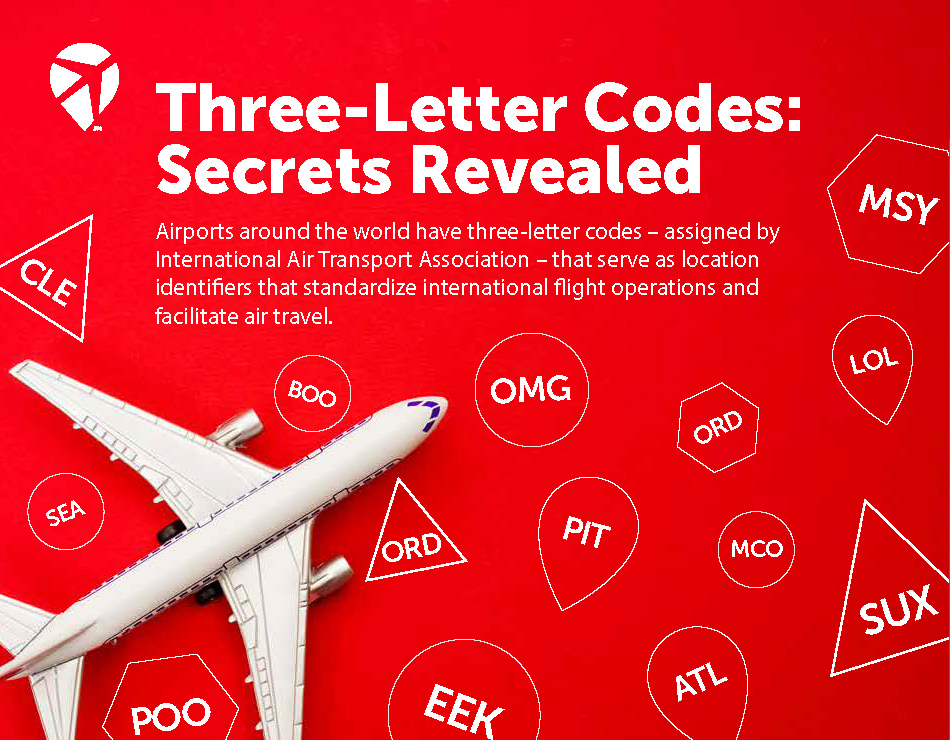 The International Air Transport Association, or IATA, an aviation industry trade group, has the responsibility for assigning each airport a three-letter code.  In the early days, the organization used two-letter codes, but that left only 576 choices and the industry quickly outgrew it. Moving to three-letter codes standardized international flight operations as well as bus, ferry and rail points. Today, there are 11,173,000 designations.

When a new airport needs a code, IATA staff first check the Airline Code Directory to make sure a suggested code hasn’t been taken.  As a rule of thumb today, the code typically uses the first three letters of the location name or at least some of the letters of the city location.

Airport codes are hard to change, in part because of the enormous cost in modifying the computer systems of airlines, airports, travel agents and other agencies. Not even the gateway to Minnie and Mickey gets a pass. In Orlando, the county airport already had the ORL designation, so Orlando International is stuck with MCO.

Another rule is that no two airports within 200 nautical miles of each other can have the same first and second letters or second and third letters. So Orlando can’t use OIA because of Miami International Airport (MIA).

The codes provide a kind of shorthand for baggage handlers, passengers and pilots.

“Aviation is the business of freedom. It liberates us from the constraints of time, geography and distance,” said Perry Flint, IATA’s head of corporate communications in North America. “Aviation connects over 21,000 city pairs for tourism and commerce. It could not function at that scale without a globally-recognized coding system for airports and for airlines.”

And then there are codes with fun or, well, unfortunate names, including POO, SUX, BOO and EEK.

POO is the official designation for the airport serving Pocos de Caldas, Brazil. FlySUX is the airport slogan and location designator for Sioux City Airport in Iowa.

BOO may sound scary, but it’s just the locator code for Bodo, Norway. EEK is not a sign of snakes on a plane but the code for the small airport in Eek, Alaska.

And don’t confuse your airports with your text messages: OMG stands for Omega Airport in Namibia and LOL is Derby Field Airport in Nevada, serving Lovelock City.