(Photos and video by Beth Hollerich)

Pittsburgh International Airport’s annual auction of “stuff left behind” always turns up some unusual items, and this year is no exception.

A Keurig and a rice maker. A Steamfast carpet cleaner. A scuba equipment case, including a regulator and pressure gauge. A Kurt Cobain record. A label maker.

And perhaps this year’s winner for strangest auction item: a 5-pound, 2,500-page English-Vietnamese dictionary left behind by one very studious, if not forgetful, traveler.

Pyle will kick off the auction at 10 a.m. Saturday, Oct. 19, at the Heavy Equipment Building on Cargo Road at the airport. Doors open at 8:30 a.m.

Throughout the year, more than 10,000 items are collected in the airport’s lost and found; anything left unclaimed after 30 days is sent to be catalogued for auction.

Proceeds from items sold that are not owned by the Allegheny County Airport Authority go to the ACAA Charitable Foundation, which helps support the airport’s military lounge, Art in the Airport program, aviation scholarships and workforce development.

Not all unclaimed items go to the auction. The airport has already donated 35 boxes of clothing to Circles of Greater Pittsburgh, a nonprofit charity, and three boxes of unclaimed prescription eyeglasses went to the Pittsburgh chapter of the Lions Club.

Last year’s auction brought in almost $180,000, with the highest bid being $22,000 for a 1997 Rodgers 35-ton detach lowboy trailer sent to auction by the airport’s field maintenance team. At the lower end of the scale, two metal tables were sold for 73 cents and 50 rolls of unused airport carpet, each 20 feet long, went for $11. For a complete list of ACAA-owned items at the auction, click here.

A box of 150 belts, many of them left behind by travelers rushing through TSA security checkpoints, sold for $5.50. (This year, 524 belts will be auctioned.)

In person or online

The auction draws a crowd from all over the tri-state area, with 229 bidders in attendance last year.  But people also have the option to bid online at joerpyleauctions.com. The sale listing will have a link to the online bidding platform. At the 2018 auction, there were 143 online bidders.

Jim Walker, 72, of Latrobe, Pennsylvania, has attended a variety of auctions over the years, but he’ll be a first-timer at the airport event.

“I have been wanting to attend the past few years but something always came up,” he said. “I don’t want to miss it again. I have this year’s marked on my calendar.”

Walker said he is interested in jewelry, tools and some of the stranger things left at the airport throughout the year. He won’t be disappointed.

This year’s auction will feature 975 pieces of jewelry sold in lots, including some pieces that are 14-carat gold and sterling silver.

Amber Coniglio, 30, of Greensburg, Pennsylvania, came with her family last December to the airport’s Holiday Open House, which allows visitors to explore airport shops without a ticket. She remembers looking around at the busy airport and wondering what happens to all the unclaimed items.

“I plan to attend the auction with my husband and parents and am curious to see all the lost items,” she said. “I am most interested in seeing the vehicles,” adding that she is hoping to come home with a new car for her grandfather.

Coniglio can bid on any of the 15 vehicles that were abandoned in airport parking, including a 2015 GMC Sierra Denali, a 2015 Dodge Ram and a 2013 Dodge Caravan. 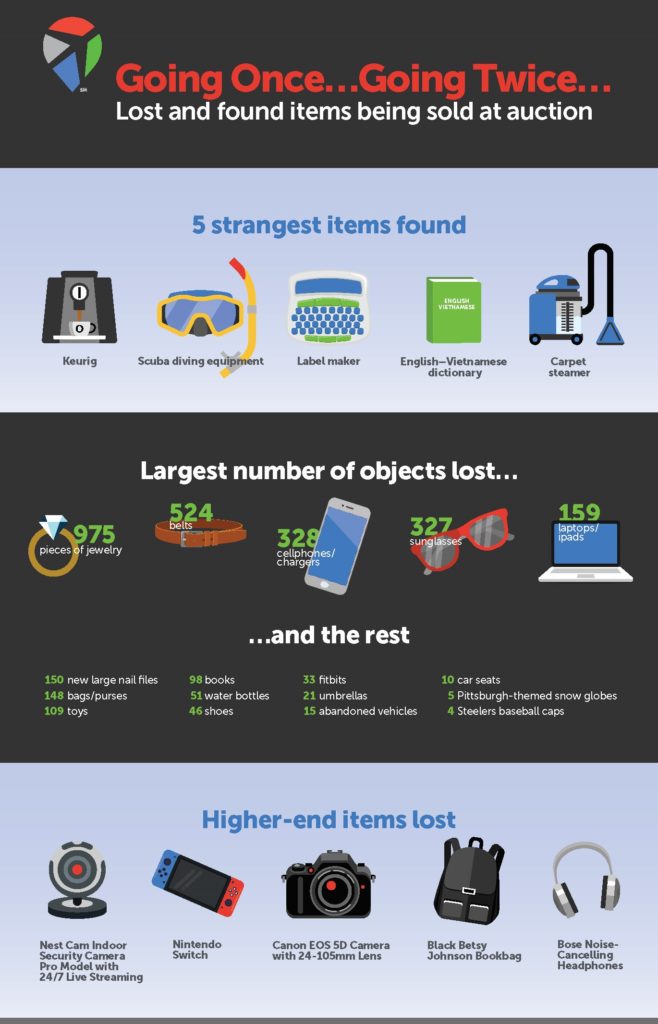 At the auction, buyers can pay by cash, check and credit cards. Each purchase comes with a 15 percent premium, an additional fee paid by the buyer to the auctioneer to cover administrative costs. The fee is reduced to 10 percent for those who pay with cash or check.

Payment, including any taxes and fees, must be made in full at the auction. Vehicles need to be towed from the auction site unless purchased by a dealer with appropriate plates. All items purchased the day of the auction must be removed within seven days of the date of sale.

Some of the other items up for bid:

And while the Steelers had a rough start to the season, don’t despair. The auction includes some brand new gear, such as Nike Steeler tennis shoes, Terrible Towels, hoodies and a car windshield cover.

To get to the auction, follow Business Loop I-376 to Hangar Road and turn left at the traffic light toward Airport Maintenance Facilities. At the next intersection, turn left on Cargo Road and follow to the top of the hill. Airport Authority employees will direct you to a parking location.