After two months of small but steady passenger increases, U.S. airlines are bracing for what could be a further drop in demand as coronavirus cases surge in popular leisure travel destinations, including Florida and Arizona.

United Airlines is already scaling back August flights that the carrier had added just a week earlier. United now plans to fly about 35 percent of the schedule it flew in August last year. On July 1, the carrier unveiled plans to fly 40 percent of last year’s schedule, according to The Points Guy website.

Other airlines may follow suit if bookings continue to drop. The International Air Transport Association last week released the results of a survey that showed people delaying potential travel plans. The survey found that 45 percent of travelers said they would return to travel within a few months of the pandemic subsiding, down significantly from the 61 percent recorded in an April survey.

“This crisis could have a very long shadow. Passengers are telling us that it will take time before they return to their old travel habits,” said Alexandre de Juniac, IATA’s director general and CEO. “Many airlines are not planning for demand to return to 2019 levels until 2023 or 2024.”

The epicenter of the pandemic has moved south and west, to states that are popular with summer travelers. Florida, Arizona, California and Texas, all hotspots for the virus, have seen average daily death tolls hit record highs in recent days, and health experts warn that deaths will continue to increase in the next several weeks. 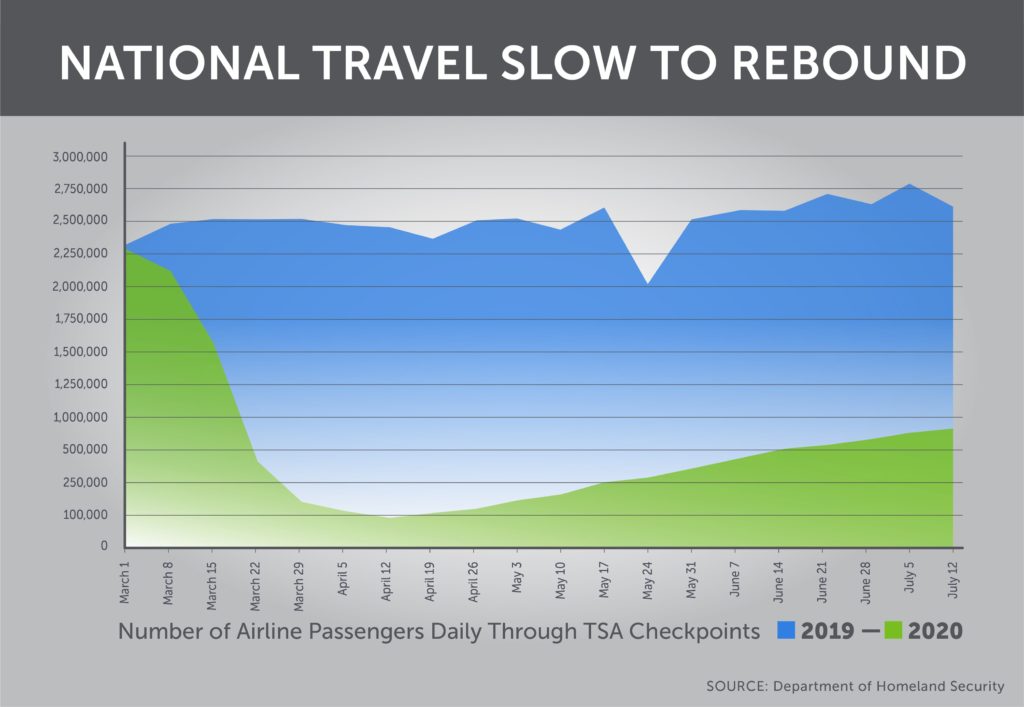 Aviation industry analysts like Bill Swelbar of Delta Airport Consultants said he assumed a second coronavirus wave in the fall that would also hurt the travel industry.

“What we did not assume is that the first wave wasn’t done. Whereas Delta and United were planning for additional capacity being added in August, those plans have been shelved,” said Swelbar, who is the chief industry strategist for the firm. “The (ultra-low cost carriers) have virtually 80 percent of 2019 capacity deployed, much of it to these new, raging hotspots in states with leisure destinations.

“For many carriers, the prisoner’s dilemma presents itself: Do I add capacity to help myself but undermine the performance of the industry, or do I hold capacity constant so that the industry might enjoy a better pricing environment? We will know soon, as the test will be immediately following Labor Day,” he said.

That’s the highest number of travelers since 779,631 traveled on March 18, but still well below the 2.1 million who traveled on July 2 a year ago. Since the holiday weekend, travel has bounced between 600,000 and 700,000 daily travelers, according to TSA.

Airports are reinforcing health and safety standards to restore travelers’ confidence that their facilities are clean and safe, officials say. At PIT, that includes a new Safe Travels initiative aimed to increase confidence in air travel though best practices for reducing the spread of germs and additional measures advocated by the Centers for Disease Control and Prevention. A key component of the program includes requiring everyone on airport property – officials, travelers and airport staff – to wear a face covering or mask, as well as other health and safety protocols.

“Demand will ebb and flow with the virus,” Swelbar said. “The walkback of actions by many to get the economy open is the first sign that all carriers are not adding capacity back into the system. Bottom line, the economic and airline recovery will be uneven with the root cause being the virus.

“While the consumer may have confidence that their airport and airline experience might be safe, what about the safety of the destination in general, the hotel, the rental car or even outside activities with large numbers of people? It is going to take a vaccine to get the industry on the road to recovery that is paved and not gravel.”