“Where do I pick up my cat being shipped from Russia?” the woman calling the airport wanted to know.

Another caller asked about chartering a private plane to South Africa. And what about bringing lollipops through security. “Is that legal?”

There is no such thing as a stupid question, and airport customer service reps receive dozens, sometimes hundreds, of calls per day.

Some border on, well, odd.

“You never know what the person on the other end of the phone may ask,” said Pittsburgh International Airport customer service rep Sharon Haynes.

The start of the pandemic in March brought an initial crush of calls, nearly doubling the number of weekly inquiries. Since then, however, the rise and fall in the number of calls has largely followed the same rate of passenger increases and decreases. 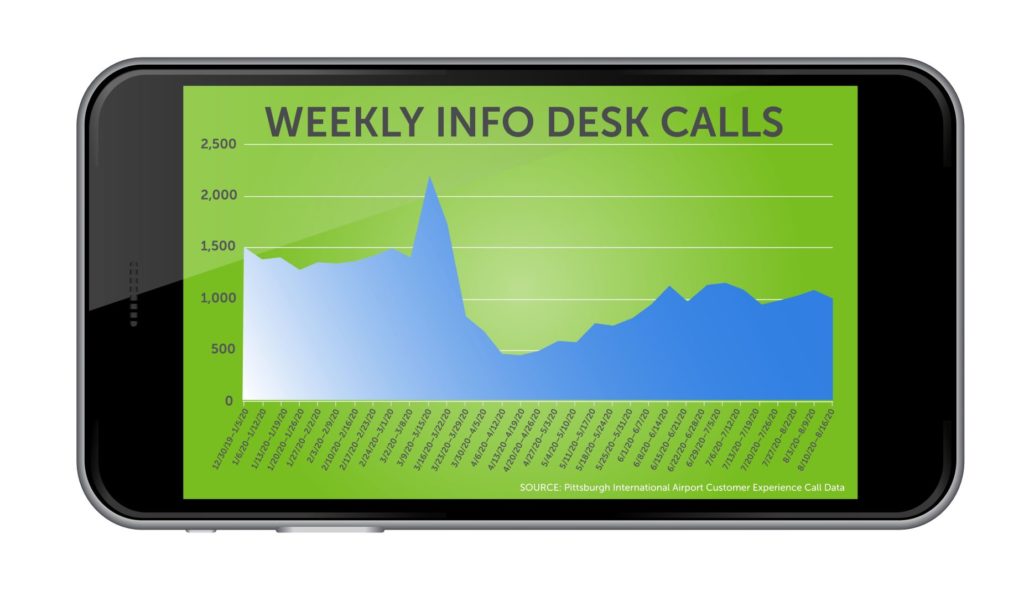 Members of the Customer Experience Team are responsible for answering the phone calls from PIT’s main contact number as well as fielding in-person questions at the customer service desk.

Many of the callers have basic questions. “Is the airport still open?” (It is.) Others want to book a flight. (They need to contact an airline.) Still others are concerned they will be quarantined when they arrive at the airport. (They won’t be.)

Sometimes the customer service reps aren’t quite sure what to say. Rep Charaye Gilliam recalled a day in June when “a man walked up to the information desk and insisted that rapper Megan Thee Stallion’s plane was here, and he needed to get on it.” Suffice to say, that did not happen.

The reps can solve a lot of problems, but sometimes travelers ask them to predict the future. A June caller heard there was only a 50 percent chance that his flight on Monday would take off and called the airport to verify.

Animals are one of the most frequent topics for unusual questions. People have called to check on the status of stingrays and monkeys, among other creatures, that were to be shipped. Another caller wanted to ship a horse. Two separate people have called with questions about cats they have seen in the airport’s parking lot.

Many of the pet callers are the victims of scams, which have been on the rise since the pandemic began. The woman who called multiple times looking for the cat that was supposedly being flown from Russia, unfortunately, was probably the victim of a scam, reps said.

Being an airport, flights are a frequent subject of questions. Since April, people have inquired about chartering a private plane to South Africa for a safari. Others want help getting to “any beach.”

And there are the TSA questions. Can pepper spray, helium balloons and Hot Wheels cars make it through the security checkpoint? A woman worried if the cookies she made for a wedding would be acceptable. One caller wanted to know if she could bring a large lollipop through security, while another was concerned if his pizza would make the cut.

The pandemic has generated its own sets of inquiries. Many people have asked about wearing hazmat or white PPE suits through the checkpoint. In May, one caller went a step further and wanted to know if they had to change clothes when they arrived at the airport and put their worn clothing in a garbage bag.

Staff members are also frequently asked if there is coronavirus testing at the airport. There is not, but other callers want to know what health and safety measures have been put in place. (There are many.)

An email scam telling people a package containing $7.4 million was waiting for them at the “Pittsburgh Intercontinental Airport” generated over 45 calls in six days in late June and early July.

“We really had never seen anything like that before. We do get calls about different scams, but never this many about the same one,” said Customer Service Rep Bob Calhoun. Staff informed the callers that the information in the email was not true.

No matter what questions come in, the representatives at PIT’s information desk try their best to locate the answer or direct the caller to the correct resource. One thing is for certain: Each day will bring new and sometimes surprising questions.

The writer is a customer service representative at Pittsburgh International Airport.