With winter returning to the region, here’s a look back at last year’s deicing operations at Pittsburgh International Airport.

With snow still blowing in mid-April, it was starting to feel like winter would never end. But for the deicing crews at PIT, it was all part of the job.

The deicing season typically runs from October through February, but planes need to be deiced at a range of temperatures, even above freezing (and even in May), as ice crystals can easily adhere to the aluminum surfaces of an aircraft. 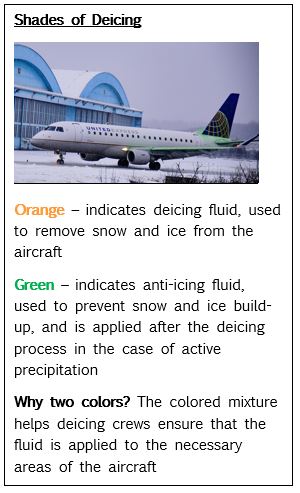 “Even though it may have seemed to be a bad winter, it’s actually been a more typical and more Pittsburgh-like season,” said Kevin Gurchak the airport’s vice president of Sustainability and Natural Resources. “We’ve been spoiled the last two winters with extremely mild weather.”

“Operations can be hectic and exciting all at the same time, and keeping prepared with lots of warm clothes and other essentials is a must,” said Samek, who is one of about 167 employees working for IDS (Integrated Deicing Services) at Pittsburgh International. “I take pride in ensuring that the aircraft and the people on them depart safely, no matter what type of conditions we encounter.”

The average time it takes Samek and his co-workers to deice a plane? Twelve minutes. That’s pretty quick, given the number of steps in the process, said Gurchak.

“It’s very similar to scraping off your car on a winter morning, with one huge exception: You can’t just scrape off the windshield of an airplane and be on your way,” he said.

“As little as one-eighth inch of ice across an entire aircraft will cause it to exceed maximum weight restrictions, making it unable to take off.”

The FAA requires that planes be deiced any time there is snow or ice buildup, and as part of their pre-flight inspection, pilots must decide if deicing is necessary.

Once pilots make the call, the control tower guides them to the deicing pad, where they transfer communication to the “ice house,” IDS’s control room. Deicing one plane may take a crew of eight, between the control room, two deicing trucks and those managing operations on the pad.

The deicing team steers truck-mounted booms over the aircraft to apply a mixture of propylene glycol and water to remove snow and ice. Inside the cab above the truck, a crew member operates the nozzle to spray the deicing fluid.

In the case of sleet, snow or other precipitation, the sprayers will also apply anti-icing fluid, which prevents the buildup of snow and ice. The crew uses a table that takes into account type of precipitation, temperature, wind speed and rate of accumulation to determine how soon before snow and ice will build up again.

Used deicing fluid is collected from the pad to be recycled and repurposed as lavatory fluid on aircrafts, or recycled as propylene glycol, an ingredient used to make cosmetics and other products.

Pittsburgh International was one of the first airports to begin managing and reclaiming spent deicing fluid. Spent aircraft deicing fluid contractors have helped the airport manage more than 200 million gallons of spent fluid since 1995.

As the deicing season winds down, Samek lauds his team for a job well done. “The most important things to keep in mind are safety, patience and attention to detail,” he said.

“We stay the course, do the job the way we are trained and we do it until the last plane departs every day.”