The rise of e-commerce has had an interesting side effect for many airports across the nation – increased cargo tonnage and demand for cargo space.

Pittsburgh International Airport is on track for its busiest cargo year in at least the last six years, seeing about 5 percent growth through August with more than 106 million pounds of cargo passing through its facilities. If that trend holds, 2019 will eclipse last year’s mark of 156 million pounds.

“This will position us for future growth,” said Bryan Dietz, vice president of air service development. “This is about ensuring that our ramp infrastructure is not an impediment to growth for existing carriers – FedEx, UPS and Qatar Airways Cargo – and also positions us for new business to able to accommodate the needs of those carriers.”

Doug Bañez, managing director of Hubpoint Strategic Advisors, said domestic cargo shipments in the U.S. had been flat for several years before the explosion of e-commerce.

“Of course that has largely changed in recent years, with the proliferation of e-commerce and in particular the entry of Amazon into the market,” Bañez said. “That has led to a lot of [U.S.] airports, quite frankly, that were not necessarily relevant to air cargo beyond FedEx and UPS operations to all of a sudden have some relevance and success in air cargo.” 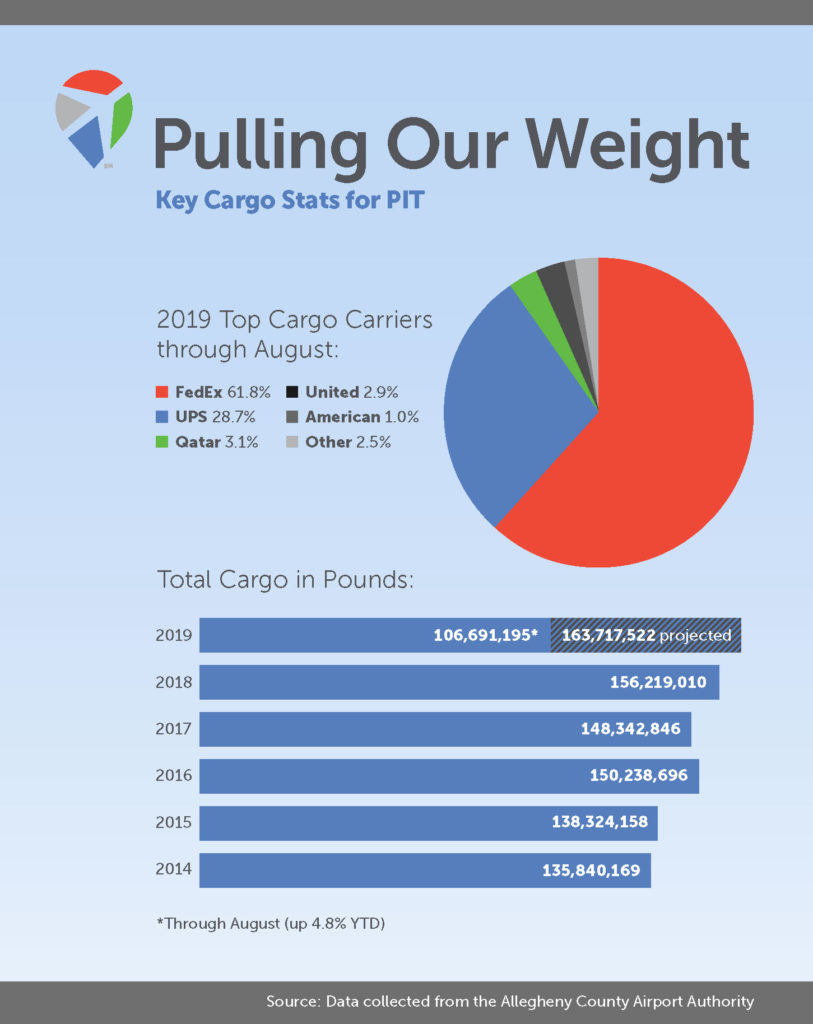 Dietz said UPS and FedEx have already flown larger aircraft into PIT in the last year. And Qatar Airways Cargo recently inked a deal with Sri-Lanka-based EFL to ship approximately 90 tons of freight per week through PIT.

EFL Group CEO Senthil Shanmugam said at the time that speed was a major factor in selecting Pittsburgh as its next North American distribution point – the ability to unload cargo quickly and efficiently, get it on trucks and on the road within two hours of the plane’s arrival.

“We are always looking for innovative solutions to differentiate the service and bring efficiency to their supply chain. In that sense, Pittsburgh is a logical gateway,” Shanmugam said in July at a press conference announcing the deal. “The main gateways, Chicago or New York, they might unload the aircraft in a few hours, but to [get it off the airport] it might take you a day or two sometimes.”

The airport’s ramp expansion project will be completed by 2021.